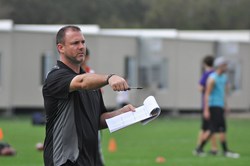 Hollis began his kicking career back in 1985 serving as the kicker on his junior high school football team and continuing throughout high school, college and eventually the NFL. After high school, Hollis chose to play at the community college level and eventually walked on at the University of Idaho (Division 1-AA).

Kicking coach Michael Husted, who created the National Camp Series (NCS) after kicking in the NFL for nine years, says he is excited about the 2013 NCS season, and working with coaches like Mike Hollis.

“Mike Hollis is a great kicking coach,” says Husted. “He helped me coach at the 2013 Super Camp in Orlando and the Husted Kicking Pro Camp in Boca Raton, FL and it is apparent that kickers at every level appreciate his playing experience and his coaching ability.”

Husted says, with excellent coaching and by utilizing its Kicking IndeX (KIX) Player Rating System, NCS provides skill development and an objective evaluation platform for student-athletes who want to showcase their capabilities to colleges and universities for recruiting purposes.

“Using the KIX Rating System, we are positioned extremely well to leverage analytics to showcase our athletes, and to provide ‘objective high school kicking specialists’ statistics' to college and university coaches,” says Husted.