With a 748% annual growth in monthly streams, WatchMojo sets a new record for monthly views on YouTube with 32 million, crossing 500,000 subscribers. 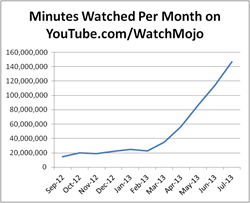 Another month, another record.

For the sixth month in a row, WatchMojo – one of the largest independent producers of premium video content – set a new company record on YouTube with 32.9 million video views.

WatchMojo is experiencing an acceleration in view, subscriber and engagement growth.

As recently as February, WatchMojo was generating 6 million video views per month on YouTube, but the channel has taken off dramatically, thanks to its editorial programming which consists of biographies and profiles of famous people and top 10 lists on pop culture topics.

With 54 million total monthly views across all websites, July marked the first month where WatchMojo's YouTube channel accounted for over 50% of its total views. All-time, WatchMojo has generated over 1.7 billion views; with 290 million coming on YouTube.

Over the past two years, YouTube has become ground zero in the video advertising space, with venture capitalists, Bertelsmann, Comcast, Time Warner, Dreamworks, and Google itself investing or acquiring YouTube-centric producers. This activity has been fueled by advertising spending on YouTube, which was pegged at $4 billion globally. The US video ad market is forecasted to more than double to $9.06 billion in 2017 from $4.14 billion according to researcher eMarketer Inc.

WatchMojo informs and entertains through video by covering the people, places and trends that have shaped history.

The company’s catalogue of 8,000 videos has generated 1.7 billion cumulative video views online since 2006. Each month, the company reaches over 75 million consumers.

In 2012, Digiday picked WatchMojo as one of three finalists, alongside CBS and HBO, in the Best Entertainment category at the Digiday Video Awards. Marketing Magazine named WatchMojo one of Canada’s Digital Media Companies to Watch in its September 2011 issue. Ernst & Young nominated Ashkan Karbasfrooshan for Entrepreneur of the Year in its 2012 media category.

WatchMojo is profitable, privately-held and based in Montreal, Canada.