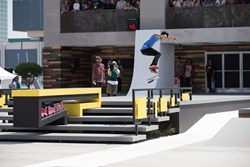 “Winning here in LA means a lot to mean since it’s the last one in LA before it moves to Austin next year. I really came out here and accomplished what I wanted to, especially after missing Munich and not doing well in Portland.” Nyjah Huston

After missing X Games Munich due to injury and then being eliminated early (while still recovering) at SLS Portland, Huston was hungry and driven coming into today’s event in his hometown.

After qualifying second, Nyjah stepped up huge for the finals. In the Control Section, a Cab back nosebluntslide on the A-frame rail meant a 9.1, his first big score of the finals. From there he was on a roll and unstoppable in the Impact Section: a kickflip backlip on the out rail, a bigspin frontside boardslide on the out rail, a switch frontside blunt slide, and a kickflip frontside noseslide. The bevy of tricks meant a massive lead for him and an insurmountable lead for the competitors. Having sealed the win after his 5th try, his last go was for the fans where he pulled a kickflip backside tailslide to fakie on the rail for a 9.2.

Upon winning Gold, Nyjah said, “Winning here in LA means a lot to mean since it’s the last one in LA before it moves to Austin next year. I really came out here and accomplished what I wanted to, especially after missing Munich and not doing well in Portland.”

Meanwhile, Cole’s performance in the Impact Section was incredible. Heading into that last part of the contest he was way back in 6th place, but Cole loves pressure and charged hard from there. A half Cab noseslide 270 out started him off, and then a switch frontside flip over the stairs moved him into 2nd place. Finally, a switch backside blunt slide on the out rail locked in the Silver medal for Cole, who took 2nd at SLS Portland weeks ago and took Gold at X Games Munich 2013.

Also representing well was Shane O’Neill, who finished just off the podium, but threw down in the finals. Highlights include a flip noseslide to manual on the manual pad in the Control Section and a switch bigspin heel flip manual 180 out in the Control Section. Later, in the Impact Section, he made a huge switch flip over the 12-foot stair set and switch 360 flip on the stairs, some of the highest scores of the contest.

Go to monsterenergy.com for more on Huston, Cole, O’Neill, and the entire Monster Energy crew competing at X Games Los Angeles 2013. There, fans will find behind-the-scenes photos and updates straight from Los Angeles.