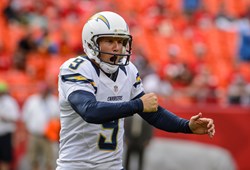 "Nick is a tremendous kicker who has always given back," says Cundiff. "His personal connection to ovarian cancer has shown him firsthand how awful this disease can be. I can only say we very excited to have Nick join our effort to fight ovarian cancer. Without question, he sets the type of example young kickers will want to follow."

Novak says he is glad to support Billy Cundiff’s efforts with Kicking For The Dream as he has seen how cancer impacts individuals and families.

"This is what it’s all about, I tip my hat to Cundiff and all the others involved," says Novak. "We have all been affected by cancer in some way or another. For me it was Annie Arth, she passed in 2005 after battling ovarian and breast cancer her entire adult life. A very good family friend and neighbor, I admired her so much because of her positive attitude and strength through it all."

Go here for Nick Novak’s’ Kicking For The Dream page.

Novak, who in his professional career has played for the Redskins, Chief, Jets and others, was re-signed to a two-year contract with the San Diego Chargers in 2011 after Nate Kaeding suffered an ACL injury to his left knee on the opening kickoff against Minnesota. During the 2011 season, Novak made 27 of 34 field goals and set a Charger record making 11 kicks from 40 yards or longer. He established an NFL career-high with a 53-yard field goal. 2 of his 3 onside kicks were recovered (66%). He also made a career-high five field goals in a win at Denver.

He competed for the Chargers job during the 2012 preseason and had a strong showing before losing out to Kaeding. He was released on August 31. On September 29, 2012 the Chargers re-signed Novak after Kaeding suffered a groin injury. He filled in for three games, and became the permanent kicker after Kaeding was released in late October.

About Kicking for the Dream:

Billy Cundiff, who has been an NFL kicker for over 10 years for teams such as the Cowboys, Saints, Browns, Ravens Redskins and is currently kicking for the NY Jets, launched Kicking For The Dream in May of 2013, as an effort to support Colleen’s Dream Foundation, a foundation which raises money to support research for the early detection of, and improved treatment for, ovarian cancer.

Kicking For The Dream Logo