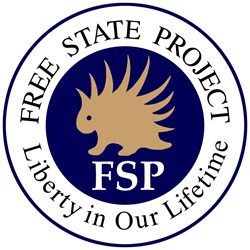 Tanks have no place in policing. Tanks are not toys. Free Staters are not terrorists. I hope the City of Concord and its police department do the right thing for the entire community, and heed our demands. - Carla Gericke, Free State Project President

A city that has had two homicides in the past decade needs an armored vehicle to protect itself against weapons of mass destruction, as well as chemical, biological, radiological, nuclear and explosive attacks, according to City Manager Thomas Aspell. In an application for Department of Homeland Security federal funding of a $258,024 BEARCAT tank, Aspell named three New Hampshire groups as presenting “active and daily challenges”: Occupy New Hampshire, Free Staters, and Sovereign Citizens. This information was only uncovered after a public records request from the ACLU, which has been focusing on the trend of the militarization of police forces in peaceful, small-town communities.

“These claims are appalling and inaccurate,” said Free State Project president Carla Gericke. “The Free State Project is a NH-based non-profit organization with the sole mission of attracting 20,000 pro-freedom people to the Granite State. In the decade of the FSP’s existence, to my knowledge, no participant has ever been implicated in a violent crime. In fact, Free Staters subscribe to the non-aggression principle, believing no one, including the state, should aggress against peaceful people.”

In an open letter to the City of Concord, Gericke demands a retraction and amendment of the misleading grant application to remove all references to “Free Staters.” She also demands an itemized list of the “daily challenges” presented by “Free Staters” to the Concord Police Department, and a written letter of apology from both the City of Concord and CPD explicitly stating the Free State Project is not a domestic terrorist organization.

In March 2013, the ACLU, concerned about the extent to which local police departments are using federally-subsidized military technology and tactics that are traditionally used overseas, launched a national program called “Towns Don’t Need Tanks: The Militarization of Policing in America.” According to NBC News, “The Department of Homeland Security now hands out more than $3 billion a year in grants to boost anti-terrorism tools around the country. The Lenco BearCat — which starts at about $190,000 and can top $300,000 with options — can easily qualify as a necessary tool under several different grant programs.”

"The American people deserve to know how much our local police are using military weapons and tactics for everyday policing," said Allie Bohm, ACLU advocacy and policy strategist. "The militarization of local police is a threat to Americans' right to live without fear of military-style intervention in their daily lives."

New Hampshire already has at least two Lenco Ballistic Engineered Armored Response Counter Attack vehicles. Police in Keene, NH, received theirs in 2012. To explain why the word "terrorism" was included on their grant application, a city council member said, "Our application talked about the danger of domestic terrorism, but that's just something you put in the grant application to get the money. What red-blooded American cop isn't going to be excited about getting a toy like this? That’s what it comes down to."

Specifications for the Lenco BEARCAT G3 are password-protected online and available only to law enforcement, military, and government agencies. An online promotional video, which has since been pulled by the company (but is available via Torrent) features a police team clad in military fatigues using a BEARCAT G3 to assault a building, break open a front door, fire tear gas, and fire what appear to be automatic weapons through multiple gun portals. During one of the Keene BEARCAT hearings, then-city-councilor Kendall Lane is captured on video saying, “We’re going to have our own tank!”

“Tanks have no place in policing,” said Gericke. “Tanks are not toys. Free Staters are not terrorists. I hope the City of Concord and its police department do the right thing for the entire community, and heed our demands.”

The Free State Project is a movement to recruit 20,000 liberty-lovers to New Hampshire, where they will exert the fullest practical effort toward the creation of a society in which the maximum role of the government is the protection of life, liberty and property. Thus far 14,630 people have signed up as participants of the FSP and almost 1,200 have already made the move.