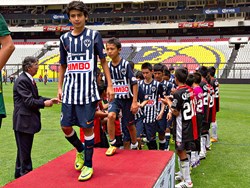 "Monterrey Rayados is excited to have the best of the best come together in San Antonio and compete for the CRI!" Nicolas Martellotto, the Director of the Rayados academy.

The Copa Rayados Internacional runs Wednesday, November 27 through Sunday, December 1st, 2013, and will bring more than 200 teams from across the region, country, and world to San Antonio Texas. For five days, the STAR soccer complex and Toyota Field Stadium will host approximately 8000 participants and their families daily. The tournament will draw over 40,000 visitors alongside the players.

With the support of the San Antonio CVB and the City of San Antonio, mayor Julian Castro invites all, "When you are not competing at the STAR soccer complex, I encourage you to take advantage of our rich, multi-cultural heritage that has inspired San Antonio's South Texas hospitality, unforgettable food, and lively fiestas."

"The response from the community been great! The interest in the tournament has exploded with teams participating from all over Mexico, USA, Canada, El Salvador, and more! We expect overflow crowds watching the showcase matches at Toyota Field stadium and excited to bring this international tournament to San Antonio!" said Scott Spencer, tournament director for CF Monterrey Rayados and the Copa Rayados Internacional. He added, "The economic impact on the greater area will reach several million dollars and will shine a spotlight on central Texas."

Nicolas Martellotto, director of CF Monterrey Rayados youth academy, comments, "We have been looking for an opportunity to engage our fanbase in the United States. We have a great following and bringing an international youth soccer event is perfect to create a family and cross cultural event to enjoy."

Also, Mexican pro clubs, UNAM Pumas, Santos Laguna, and Correcaminos UAT, are also participating. International teams from El Salvador and Canada, and teams across the United States will be descending on San Antonio over thanksgiving to compete in this elite boys soccer tournament.

With both the San Antonio Convention and Visitors Bureau and the San Antonio Hispanic Chamber of Commerce as strategic partners, it will be a great opportunity for sponsors and partners to engage the regional, national, and international soccer communities. Benchmarc360, inc., a leader in corporate events and relations, is a partner to support the business alliances for the tournament. Contact Kathy Bracewell at kbracewell(at)benchmarc360(dot)com or 1-678-291-0011. Aeromexico, the leader in air travel in Latin America and the USA, is now a major sponsor of the Copa Rayados Internacional. For more information on travel discounts, see http://www.coparayados.com. Telemundo television and Cox Media Group (radio stations 99.5 KISS FM and X106.7FM classic rock) are both media partners for the tournament to provide multiple promotional platforms and fan engagement.

See the best of the best youth teams in USA and beyond in San Antonio this Thanksgiving!

For more information about the tournament, visit http://www.coparayados.com or contact Scott Spencer 1-210-305-4821 or scottspencer(at)rayados(dot)com.