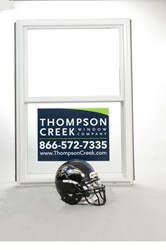 Thompson Creek is the "Official Window Company of the Baltimore Ravens"

The Ravens' dedication in providing a superior product for both fans and business partners, as well as their community involvement, make this relationship a natural fit for Thompson Creek Window Company.

Kevin Rochlitz, Vice President Corporate Sales & Business Development for the Baltimore Ravens said, "The Ravens are excited about our new partnership with Thompson Creek Window Company. We are thrilled that every home game week, our fans will get to see the window of opportunity feature on RavensVision that links the Ravens to such a great company. We look forward to doing many unique things with our partnership."

About The Baltimore Ravens

"Our mission is to win football games, serve our fans, and be a positive force in our community."

Now in their 18th year of existence, the two-time Super Bowl Champion Baltimore Ravens are the only NFL team to earn a playoff berth in each of the past five seasons (2008-12). Since head coach John Harbaugh’s arrival in 2008, Baltimore has won at least one playoff game each year, advanced to three AFC Championship contests, and in 2012, captured the Super Bowl XLVII World Championship. The Ravens, who also won Super Bowl XXXV during the 2000 campaign, have made the playoffs in six of the past seven seasons – producing three AFC North Division titles during that span (2006, 2011 and 2012).