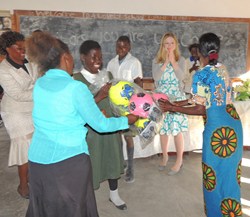 “It was wonderful to have Chelsea Clinton and representatives from the Clinton Foundation visit our projects on the ground in Africa to see how people are trying to live with, and protect, elephants,” said Patrick Bergin, AWF CEO

“It was wonderful to have Chelsea Clinton and representatives from the Clinton Foundation visit our projects on the ground in Africa to see how people are trying to live with, and protect, elephants,” said Patrick Bergin, CEO of the African Wildlife Foundation. “The African Wildlife Foundation has a long history of working with local communities to find conservation solutions that benefit both wildlife and people, and we were excited to be able to show the Clinton Foundation two examples of how we work.”

Over the past few years, elephants in Africa have come under increasing threat from poaching and illegal wildlife trafficking. More than 35,000 elephants were poached across the African continent last year; at current rates, Africa’s elephants could become extinct within our lifetimes. This is why programs such as AWF’s are so important, ensuring that communities can live alongside, value, and protect elephants.

Prior to visiting the AWF projects, Chelsea Clinton said, “Given the current rate of poaching of elephants in Africa, it’s vital to understand how people are living alongside wildlife in a way that benefits people and communities as well as protects the species. I look forward to visiting the African Wildlife Foundation’s programs in Zambia to see firsthand how their programs work on the ground.”‪

While in the Kazungula landscape—an AWF conservation area that spans parts of Zambia, Zimbabwe, Botswana, and Namibia, and that hosts the largest elephant population in Africa—Clinton toured Lupani Conservation Primary School. AWF rebuilt the once-dilapidated Lupani School into a modern facility in exchange for the local community setting aside land that allows elephants to travel peacefully between countries. Along with constructing six new classrooms, AWF built teacher housing complete with solar panels for electricity, to help entice teacher talent to the region. The impact has been significant in an area where more than 80 percent of the population is illiterate: Now, more than 140 students are enrolled at Lupani School, and more students have been accepted into secondary school, allowing for further continuation of their education. The school has further become a community education center that provides literacy classes for adults.

In addition to Lupani School, Clinton visited the brand-new Machenje Fishing Lodge, a sport-fishing camp established by AWF as a tourism enterprise owned solely by the community. AWF brokered an innovative partnership whereby the community and a private-sector partner, which manages daily operations, share revenues. This arrangement will increase area income while also putting the community in the driver’s seat in terms of determining how best to apply revenue for local development projects. Revenues from the lodge will also be used to help fund elephant patrols in the community conservation area.

And, while Machenje Fishing Lodge has only recently opened, it has already provided employment to the local population. Machenje was built from locally sourced supplies, and building and construction was done by local workers. Many of the full-time staff positions will also be filled by local residents.

Both Lupani Conservation Primary School and Machenje Fishing Lodge are located in the Sekute Chiefdom, about 60 km outside of Livingstone. In recent years, the Chiefdom had experienced greater human–wildlife conflict and competition for natural resources due to expanding human settlement.

“This was not a positive situation for either the people of Sekute or the elephants,” observed Nasson Tembo, director of the Kazungula landscape for the African Wildlife Foundation. “We worked with the community to develop a conservation strategy that would work for everyone: Parents asked for a new primary school for their kids. The Sekute leadership wanted more income opportunities for their citizens. In exchange, the community set aside 20,000 hectares of land for conservation. Partnering with communities is the only way for conservation to work in Africa.”

Bergin agrees that, particularly in light of Africa’s current wildlife poaching crisis, it’s important for local communities to benefit from living alongside wildlife. “If people don’t believe that living next to wildlife is beneficial for them, then they are that much more likely to turn a blind eye to poaching,” he said. “On the other hand, if a community understands that they are getting income, employment, and other benefits from wildlife, they are going to be active in stopping people who engage in illegal wildlife trafficking.”

The Clinton Foundation has been supportive of such anti-poaching work and other efforts by conservation organizations such as AWF to eradicate illegal wildlife trafficking in Africa and around the globe. Last November, former Secretary of State Hillary Clinton announced that the U.S. State Department would put the issue of illegal wildlife trafficking on its agenda. The move cast a much-needed spotlight on the crisis plaguing Africa and spurred greater action by many governments against poaching of Africa’s elephants and rhinos. Secretary Clinton recently hosted a roundtable discussion of conservation CEOs in New York City on the elephant poaching crisis.

In addition to its conservation work with communities, AWF has ramped up its anti-poaching work throughout the continent of Africa. AWF has taken a four-tiered approach to poaching, supporting wildlife authorities on the ground, enhancing law enforcement, pushing international policy, and raising awareness. CEO Bergin is scheduled to attend the Annual Meeting of the Clinton Global Initiative this fall to bring more attention to the matter of illegal wildlife trafficking.

Founded in 1961, the African Wildlife Foundation (AWF) is a leading conservation organization focused solely on the African continent. AWF’s programs and conservation strategies are based on sound science and are designed to protect both the wild lands and wildlife of Africa and ensure a more sustainable future for Africa’s people. Since its inception, AWF has protected endangered species and land, promoted conservation enterprises that benefit local African communities, and trained hundreds of African nationals in conservation—all to ensure the survival of Africa’s unparalleled wildlife heritage. AWF is a nonprofit organization headquartered in Kenya and registered as a 501(c)(3) in the United States. For more information, visit http://www.awf.org.

With a local office in Livingstone, Zambia, the African Wildlife Foundation (AWF) is working in the Kazungula landscape, an area covering approximately 90,000 sq. km and comprising parts of Namibia, Botswana, Zimbabwe and Zambia. The landscape is home to a quarter of Africa’s elephants; features one of the greatest natural wonders of the world, the Victoria Falls; and forms one of the most important terrestrial and freshwater ecosystems in Africa.