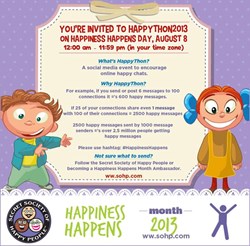 The Secret Society of Happy People will celebrate the 14th Annual Happens Day on August 8th with a social media event, HappyThon2013, to encourage chats about online happiness.

“The day originally began to encourage people to talk more about happiness,” says Society Founder Pamela Gail Johnson. “We even got proclamations from 19 governors in 1999 to make it feel official.”

After the first year, per the request of Society members, Happiness Happens Day was expanded to include the month of August so people could celebrate on the day that made them happiest.

On August 8th the Society will host HappyThon 2013 a social media event to encourage online happiness buzz. Over 1000 Happy Happiness Happens Month Ambassadors and Society members will send or post six happy messages that day and encourage their connections to do so too in an effort to make happiness contagious.

Celebrating Happiness Happens Day and Month is something everyone can do by noticing and sharing their happy moments and encourage others to do so too. However, we have plenty of celebration ideas at our website and on our social media sites.

Some companies and members celebrate the whole month or they just pick a day that works for them and celebrate the. The idea is to get people focused on the habit of happiness and recognizing more if it. One of the tools the Society provides is the 31 Types of Happiness to help people recognize more happiness when it happens.

Purpose: The Secret Society of Happy People encourages the expression of happiness and discourages parade-raining. Parade-rainers are those people who don't want to hear your happy news. And no, we don't tell people to be happy if they aren't or how to be happy.

Creed: As a member of the Secret Society of Happy People I will:

Recognize happiness with the same enthusiasm as I do unhappiness,
Encourage others to share their happiness,
Don’t unnecessarily rain on other people’s parades.

Members: Thousands from around the world in more than 34 countries

History: The Society gained international recognition in December 1998 when it challenged Ann Landers for discouraging people from writing happy holiday newsletters to enclose with their holiday cards.

Since then the Society has:

The Society is included in Wikepedia and has been featured in People Magazine, Newsweek and Time, and has been included in stories in Reader’s Digest, Prevention, Ladies Home Journal, Harpers, Yoga Journal, SELF, Redbook, Glamour, and New Age Journal. Founder Pamela Gail Johnson was on Politically Incorrect with Bill Maher.

Hundreds of print and broadcast outlets throughout the world have covered the Society, including CNN, The Associated Press, USA Today, Good Morning America (ABC), The Wall Street Journal, The Washington Post, The Dallas Morning News, The Fort Worth Star-Telegram, and Los Angeles Times. Parade named the Happiest Events, Inventions and Social Changes of the Century as the “Best List of the Century.”

A few websites that have linked to the Society include: Beliefnet.com, Good Housekeeping, DailyInBox.com, and USA Today.com Hot Site.

The Society has been included in Think You’re the Only One?, 365 Health and Happiness Boosters, Voices of Truth, Every Day’s a Holiday Calendar, Chase’s Calendar of Events, and Trivial Pursuit’s 1990’s Edition includes a question about Admit You’re Happy Day.