The winner of California Casualty’s latest "Work Hard, Play Hard" contest is Tom Vail, Volunteer Firefighter of the Sidney Fire Department, NE. Given the option of a bass boat or $10,000, Vail chose the $10,000 option and was presented the check August 1st. 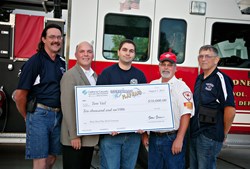 These are indeed everyday American heroes. They work hard and they deserve to play hard.

California Casualty's “Work Hard, Play Hard” contests honor and reward everyday heroes such as firefighters, volunteer firefighters, peace officers and EMT's – this time with a bass boat or $10,000 equivalent cash option. Tom Vail’s name was randomly selected from a pool of nearly 11,000 entries from around the nation. When notified that he was a finalist, Tom chose the $10,000 option.

Tom arrived at the Sidney firehouse for a regularly scheduled monthly meeting unaware of the surprising news awaiting him. Shawn Courtney, California Casualty Representative, had the honor of presenting Tom with a $10,000 check while announcing him as the latest “Work Hard Play Hard” contest winner. Chief Stone was instrumental in coordinating the surprise shared with fellow firefighters and others who wanted to be a part of the excitement.

Tom’s reaction was calm and collected as he made his way to the front of the room and posed for a photo with Shawn. Tom has been a volunteer firefighter for six years, and has volunteered at the Sidney Fire Department for nine months. He is a husband, father of two and also works a full-time job. Tom admitted to being a practical person, so when asked what he planned to do with his bounty, he said he would pay bills and put some in savings.

“These are indeed everyday American heroes,” said Mike McCormick, Vice President for California Casualty. “They work hard and they deserve to play hard. We’re excited to give one of them a bass boat or $10,000.”