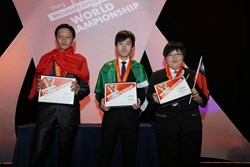 The 2013 Microsoft Office Specialist World Championship attracted more than 344,000 unique candidates from 90 countries who competed to demonstrate their mastery of Microsoft Office products. 100 student finalists participated in the final round of competition.

“More than 650,000 exams were uploaded as part of this competition, so these student winners are truly the best of the best at effectively using Microsoft Office tools,” said Alison Cunard, general manager for Microsoft Learning Experiences Group. “Students worldwide are realizing the benefits of mastering these key productivity skills as they prepare to enter the workforce. Learning industry-leading Microsoft programs helps them to be more productive on the job from day one and that is what employers are looking for today.”

In the concluding round, competitors participated in unique project-based tests to demonstrate their ability to create documents for the information presented in Word.

“In its 12th year, the Microsoft Office Specialist World Championship continues to grow in popularity as more students around the world realize the value of earning an industry-recognized technology certification,” said Jim Holm, executive vice president, Certiport. “This year we had a 24 percent increase in the number of participants, and more than 4 million individuals have now taken a Microsoft Specialist exam to validate their skills. Holding the World Champion title will stand out on their resumes as they continue their academic and professional careers.”

Next year, Certiport will host the 2014 Microsoft Office Specialist World Championship in Anaheim, CA, U.S. Download high-resolution photos of this year's winners, along with images of the student awards ceremony at: http://www.flickr.com/photos/certiport/.

“Certiport,” “IC³” and “MeasureUp” are registered trademarks of Certiport, Inc. in the United States and other countries. The names of actual companies and products mentioned herein may be the trademarks of their respective owners.