Rising temperature and changing lifestyle coupled with dual income families are pushing the market of air conditioners in India. 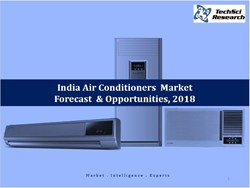 Indian air conditioners market is expected to grow at the CAGR of around 13% during 2013-18.

Indian market was flooded with air coolers a decade ago in early 2000 and with the advent of air conditioners technology, coolers have been gradually replaced with windows and split air conditioners in residential and commercial establishments. This is because of rising climate temperature, disposable income, population and booming real estate sector in the country. Air conditioners market has mainly grown because of high volumes of construction projects in India during last five years, which is further expected to grow because of planned investment of about USD 1 Trillion in infrastructure segment during 11th plan period by Government of India, which contributes to the demand of air conditioners as a part of in-built furniture in the sector.

According to a recently published report by TechSci Research ‘India Air Conditioners Market Forecast & Opportunities, 2018’, Indian air conditioners market is expected to grow at the CAGR of around 13% during 2013-18. Northern and Southern regions are leading contributor to the air conditioners market revenue in India, where, Delhi and its suburbs account for highest demand.

Increased temperature mainly in the months of April-June generates highest demand, which can be more than 50% when compared with other months in a year. Most of the revenues are generated from the Northern region of India i.e. Delhi and its suburbs followed by Mumbai, Ahmadabad and Kolkata cities. The biggest challenge observed in the growth of market is, rising electricity charges in the country, which creates hindrance with regard to affordability.