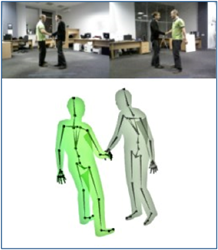 With access to multi-person tracking we will be able to generate an expanded range of motions, a real game-changer, especially considering the desktop software is so affordably priced. -- Anthony Hoit

Responding to the demands of its growing customer base of filmmakers, animators and videogame developers, the new capabilities are free to all Standard license owners. Multi-person and multi-GPUs functionality and other new features are available via the company’s website http://www.ipisoft.com.

“Almost since the day we introduced iPi Motion Capture, our customers have been asking us to add multi-person functionality to capture even more sophisticated motion,” Nikonov says. “The new multi-person tracking feature will initially support up to two actors, requiring five to eight Sony PS Eye cameras or two depth cameras (such as Kinect or Xtion). We’re proud to offer this improved capability to industry professionals, students and enthusiasts to help them realize their creative potential without limitation.” More info about multi-person tracking can be found here.

Nikonov added the multiple video cards capability represents a step closer toward the company’s goal of real-time tracking. With two GPUs, users will see an estimated 40-percent increase in tracking speed, as well as an optimized pipeline thanks to users spending less time tracking results. More info about multiple GPUs can be found here.

Additionally, the company has made two other significant changes to the software:

“We’re already using iPi Motion Capture successfully on our middle-ground and background zombie action, but having the ability to record two actors at the same time and get that interaction is a huge plus,” Hoit says. “With access to multi-person tracking we will be able to generate an expanded range of unique motions to incorporate into our animation. Coupled with the increased tracking speeds, this is a real game-changer, especially considering the desktop software is so affordably priced.”

Pricing and Availability:
The multi-person functionality is a free upgrade for those using the Standard license of iPi Motion Capture 2.0. iPi Soft is offering new customers and owners of Basic and Express licenses a 30 percent discount valid through August 25, 2013. Details and pricing are available at http://ipisoft.com/software/standard-edition/.

iPi Soft,LLC is the developer of iPi Motion Capture™, a markerless mocap software tool that uses sophisticated image processing and computer vision algorithms to recognize and track the human body

The Graphic Film Company relies on iPi Motion Capture for previs and to track zombie motions in the upcoming feature film "Night of the Living Dead Origins."