Kennedy Center Opera House tickets for Book of Mormon receive a 20% discount by tickethunteronline.com. The major ticket reseller offer a promotion to clear overbought inventory at a loss. 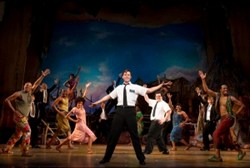 Fans can take advantage of a 20% discount at Tickethunteronline.com by typing in promo code "wicked" at check out.

Performances of "Mormon" are scheduled to run at the Kennedy Center Opera House through 2014. The engagement is part of a national tour of the hit musical, which opened on Broadway at the Eugene Theater in 2011.

Book of Mormon tickets in Washington, DC have been in tremendous demand selling, at times, three times face value in the resell market place. A monstrous financial success, the show grosses on average $1.5 million per week.

The Tony Award winning "Book of Mormon", written by South Park creators Trey Parker and Matt Stone, has had a consistent cast on Broadway since its debut in March 2011.The cast change has sparked concern by a major ticket seller over whether or not Book of Mormon tickets demand will drop off. Mega online tickets retailers, Ticket Hunter Online voiced concern on the future of sales.

The CEO of the Los Angeles based Ticket Hunter Online stated they would be offering a discount for the remaining year.

"We overpurchased Book of Mormon tickets at the Kennedy Center Opera House due to the demand in other cities. Now we have an excess amount of seats. I am hoping our promotion will help increase traffic," stated CEO Michael Quinones.

Fans can take advantage of a 20% discount at Tickethunteronline.com by typing in promo code "wicked" at check out.