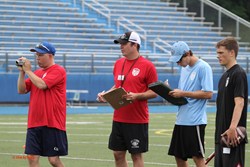 Husby, who is the owner and head instructor of Special Teams Football Academy, started kicking at the age of 12 and worked his way to punting in college and as an NFL Free Agent.

“There’s a lot of great talent in Colorado,” says Husby. “I am looking forward working with these young kicking specialists and helping them reach their kicking goals. Colorado certainly has the potential to be a “hot bed” of kicking talent for college coaches to recruit from.”

Husby, who is the owner and head instructor of Special Teams Football Academy, started kicking at the age of 12 and worked his way to punting in college and as an NFL Free Agent; something he has been perfecting ever since.

In 2012 Husby was named Head Kicking Coach for the National Camp Series All-Midwest Regional and Tournament Team. He was also one of the "featured coaches" at the NCS "Super Kicking Camp VI. In addition, he was also "Nike Coach of the Year" Clinic Speaker on "The Kicking Game."

Kicking coach Michael Husted, who created the National Camp Series (NCS) after kicking in the NFL for 9 years, says having kicking coaches like Chris Husby attest to the quality of coaches at NCS events.

“Chris Husby is an excellent kicking coach,” says Husted. “He helped me with the NCS Super Camp in Florida earlier this year. I’m looking forward to working with him on all his NCS Divisional Kicking Camps in 2013.”

"2012 shaped up to be the best year yet for the National Camp Series,” says Husted. “We introduced our Kicking IndeX (KIX) Player Rating System and are positioned extremely well in 2013 to leverage analytics to showcase our athletes, and provide objective high school kicking specialists’ statistics, to college and university coaches.”

By sorting through over six years of historical event data, Husted says the KIX system determines a kicker’s rankings by cross-referencing player data to determine how the athletes stack up against others, both presently and historically.