Wicked continues to bewitch audiences around the country and across the pond, said Felina Martinez at BuyAnySeat.com. The popular play currently has four productions performing in New York, London, Boston and Houston – and opens in Toledo, Oklahoma City and Minneapolis next. 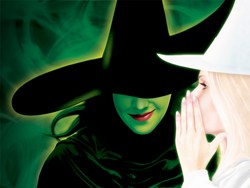 Elphaba (Wicked Witch of the West) and Glinda (Good Witch of the North) in Wicked, now playing in New York, London, Boston and Houston - and headed for Toledo, Oklahoma City and Minneapolis next.

Wicked, already a three-time Tony Award and Grammy winner, has been bewitching audiences and breaking box office records since it opened almost 10 years ago.

Officially known as Wicked: The Untold Story of the Witches of Oz, the musical premiered at the Gershwin Theatre on Broadway in October of 2003, where it remains at over 100 percent capacity, as per official box office data provided by entertainment-link.com.

Across the pond, the London production continues to be extended by popular demand at the Apollo Victoria Theatre, where it opened in September of 2006. Meanwhile around America, two U.S. traveling productions have played to packed houses in Charlotte, Tucson, Rochester, Dallas, Kalamazoo, South Bend, Madison, New Orleans, and Philadelphia.

One company is now appearing at the Boston Opera House in Boston, Mass., where it opened on August 7 and plays through September 15. The cast then opens at the Orpheum Theatre in Minneapolis on September 18 and runs through October 27, 2013.

A second production company is performing at the Sarofim Hall in Houston, Texas until August 11. The cast then travels to open at the Stranahan Theater in Toledo, Ohio on August 14 and perform through September 1. The ensemble then moves to the Civic Center in Oklahoma City from September 4 through September 22, 2013.

“As many of the performances begin to sell out closer to show time, we’re proud to be able to offer theatre-goers the most comprehensive and continuously refreshed selection of theatre tickets available, with a worry-free guarantee to protect their purchase,” said Martinez.

“To access the complete selection of Wicked tickets we now have available, customers can go to BuyAnySeat.com and search for Wicked – then select their tickets,” said Martinez.

Wicked has enjoyed steady box office success since its debut. It currently holds the weekly-gross-takings records in Los Angeles, Chicago, St. Louis, and London. In the week ending January 2, 2011, the London, Broadway, and both North American touring productions all simultaneously broke their respective records for the highest weekly gross.

It is also estimated that as of September 2011, Wicked’s North American and international companies have been seen by nearly 30 million people worldwide and cumulatively grossed almost $2.5 billion in receipts. (Source: wikipedia.org)

The original Broadway production celebrated its ninth anniversary on October 30, 2012, after playing 3,822 performances, making it the 12th longest-running Broadway show in history. Since its opening in 2003, it has broken the house record at the Gershwin Theatre twenty times.

It regularly plays to 100 percent capacity and grosses in excess of $1.6 million each week, making it one of the most lucrative productions on Broadway. Plus, Wicked is only the third musical in Broadway history to exceed $500 million in total gross. And, in the final week of 2012, the Broadway production re-broke its own record, earning an all-time gross of $2.9 million. (Source: Wikipedia.com)

With music and lyrics by Stephen Schwartz and a book by Winnie Holzman, the original Broadway production was directed by Joe Mantello and choreographed by Wayne Cilento. It is based on the 1995 Gregory Maguire’s book called Wicked: the Life and Times of the Wicked Witch of the West – a parallel novel of the 1939 film The Wizard of Oz and L. Frank Baum’s classic story The Wonderful Wizard of Oz.

It tells the story of two unlikely friends, Elphaba (the Wicked Witch of the West) and Glinda (the Good Witch of the North). The two struggle through opposing personalities and viewpoints, rivalry over the same love-interest, reactions to the Wizard’s corrupt government, and finally, Elphaba's fall from grace.