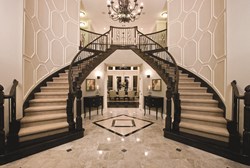 This acquisition reflects the thriving economic growth of the Houston market with the migration of large energy companies to the area, and the expansion of the Grand Parkway.

Toll Brothers, Inc. (NYSE:TOL), the nation’s leading builder of luxury homes and five-time Texas Builder of the Year, recently purchased nearly 600 acres in the growing northern quadrant of the Houston MSA, the second largest land contract in the area for the national home builder behind its previous acquisition in Montgomery County in November of 2012.

Formerly a family farm, the historic property will be the future home of approximately 900 luxury residences. Toll Brothers will offer its signature, award-winning home designs that earned the Company the distinguished honor of being named Texas Builder of the Year by the Texas Association of Builders in 2013, 2012, 2011, 2008, and 2007. The Company has projected development to start in 2014.

“This acquisition reflects the thriving economic growth of the Houston market with the migration of large energy companies to the area, and the expansion of the Grand Parkway,” said Karl Mistry, Houston Division President. “It also demonstrates our strong belief that home buyers are looking for new homes in a Master Planned Community that addresses their evolving needs and lifestyle,” he added.

Since Toll Brothers first entered the Houston market in 2009, it has successfully purchased lot options throughout most of the metro area and is currently open for sale in 14 neighborhoods – The Estates at Blairs Way, Timarron, and Wooded Overlook at The Villages of Creekside Park in The Woodlands; Riverstone in Sugar Land; The Heights, The Sanctuary, and the upcoming Milan Estates at Sienna Plantation and Flamingo Island at Lake Olympia in Missouri City; Barrington in Kingwood; Vintage Lakes in Northwest Houston; Vista Shores at Towne Lake in Cypress; The Reserve at Katy, the Company’s first raw land deal in the Houston area, and Ironwood Estates and Sycamore Meadow at Cinco Ranch in Katy.

Toll Brothers, Inc., a Fortune 1000 company, is the nation's leading builder of luxury homes. The Company began business in 1967 and became a public company in 1986. Its common stock is listed on the New York Stock Exchange under the symbol "TOL." The Company serves move-up, empty-nester, active-adult, and second-home buyers and operates nationwide.

The Company was named 2012 Builder of the Year by Professional Builder magazine (http://www.housingzone.com) and becomes the first builder to win this award twice. Toll Brothers is honored to have won two other coveted awards in the home building industry as well: America’s Best Builder and the National Housing Quality Award. The Company was also ranked #1 in 2011 and 2010 in Financial Soundness, Long-Term Investment, and Quality of Products/Services in FORTUNE magazine‘s annual World’s Most Admired Companies survey in the home building category.

Toll Brothers proudly supports the communities in which it builds; among other philanthropic pursuits, the Company sponsors the Toll Brothers - Metropolitan Opera International Radio Network, bringing opera to neighborhoods throughout the world. For more information, visit TollBrothers.com.

This is not an offering where prohibited by law.