Viva Cinema will be showing four of Mexico's top films on August 16 and 17 at Houston's First Mexican Film Festival. Special pricing and packages are available and the final night's screening of Nosotros Los Nobles is a free, first-time screening and is first-come, first-serve. 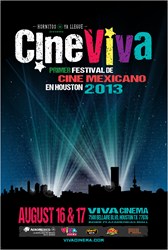 Hornitos Tequila and Viva Cinema, along with El Norte 107.9FM, La Raza 98.5FM and AeroMexico, are proud to announce Houston’s First Mexican Film Festival. On August 16 and 17, 2013, Viva Cinema, Houston’s newest movie theatre, will be featuring award-winning, box office hits directly from Mexico. The mission of the Mexican Film Festival is to showcase the top acting and directing talent from Mexico and celebrate the best films from the country.

The other festival films will be “Colosio, El Asesinato” and “El Fantastico Mundo De Juan Orol.” For a complete list of all films in the Mexican Film Festival, please visit VivaCinema.com.

Viva Cinema is a newly-remodeled movie theater in PlazAmericas Mall located at 7500 Bellaire Boulevard. The multi-screened theater with state-of-the-art digital projection showcases a mix of first-run movies in English with Spanish subtitles as well as films from Mexico, Spain, Brazil, Argentina and more in Spanish with English subtitles. Viva Cinema is a family-friendly theater with wallet-friendly prices of only $7 per show. People can arrive early to the movie to enjoy Viva Cantina, which provides a great menu of different food and drinks. Food from the Cantina can also be conveniently taken into Viva Cinema on specially-designed trays to fit with the theater seats. Viva also has a special event area that is perfect for children’s birthday parties and celebrations.