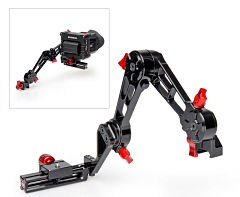 Zacuto releases a new electronic viewfinder (EVF) mount, the Axis. The Axis is an adjustable, universal EVF mounting option- designed to work with any camera; DSLR’s, Canon EOS C100, Canon EOS C300, RED Scarlet, RED Epic, Sony F3 and any EVF. It is designed to come from the top of the camera rig, leaving a sufficient amount of room around the lens for focusing, and to not be seen by the lens. It can swing far forward for a compact shoulder mounted rig like a Zacuto Recoil, or to a rear extended position and act as a tripod leveler. The Axis EVF mount attaches to the camera via other Zacuto accessories like a Z-Rail, Half Cage or other Z-rail accessories. It is also compatible with NATO, SWAT, RED, PICATINNY and Wooden Camera rails.

“I love this mount! It has an incredible reach. I was really surprised by it. It is lightning fast to install to a RED Swat Rail. Slide it on and tighten. I screwed on the EVF sliding base to my RED EVF…done in seconds. At first sight, I thought it would be as heavy as a large Noga arm. Despite its large appearing size, it isn't heavy at all," says DP of nothingfilms.com, Rob Macey. “The machined billet anodized aluminum looks as good as it works. Form definitely meets function with the Axis EVF mount. The joints are buttery smooth, and firm, which lock down easily. Even with the Axis arm fully extended, the mount holds my RED EVF without slack or play.”

The Axis has three pivoting points which are all controlled independently by red tension levers. To position the EVF, dial in the tension at each joint and then pull to position the EVF. Either leave it like that or tighten levers to fully lock. By having three locking levers it gives the ability to dial in the exact amount of tension on each segment. The possibilities are endless and the EVF can be positioned anywhere in 24” space from where it’s mounted on the camera for high-mode, low-mode, dolly, handheld and tripod shots without bending over the camera. The Axis can also be installed or packed away in seconds.

To check out the Axis, visit the Zacuto store or contact a local authorized Zacuto reseller. To get more information on the Axis, visit: http://www.zacuto.com/the-axis-evf-mount.

ZACUTO, located in Chicago, Illinois, is known for their "Made in the USA" brand of high quality, originally designed camera accessories. Zacuto Films produces original programming with EMMY’s won in 2010, 2011, and 2012 (Midwest region) or follow @Zacuto on Twitter. 888-294-3456.