Looking for Submissions from Unknown Furniture Designers and Lovers 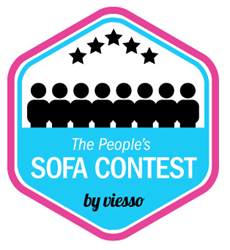 The People's Sofa Contest by Viesso

[The People's Sofa Contest] gives us an opportunity to interact directly with the public, to get inspired by a new design from our fellow design lovers, and to give someone a brand new sofa!

On Monday, July 12, 2013 modern furniture design company Viesso launched The People’s Sofa Contest, a nationwide contest for anyone that loves modern design. Open to participants 21 and over, Viesso is looking for innovative submissions that exemplify modern furniture. The winning design will become the newest product in the company’s collection and will be made available for public purchase.

Submissions can be sent to Viesso starting August 12th through September 6th where they will be reviewed by September 13th. Finalist selections will be based on a variety of criteria including how well the judges like the design and how they think it will fit into the Viesso collection.

Once the finalists are determined, their designs will be posted on Viesso’s website and Facebook page where the public can vote for their favorite.

“We’re extremely excited about this contest,” says Travis Nagle, co-founder of Viesso. “It gives us an opportunity to interact directly with the public, to get inspired by a new design from our fellow design lovers, and to give someone a brand new sofa!”

Not only will the winning design become part of the company’s collection, it will be named after the winner and Viesso will also build it and send it to the winner at no cost.

The only restrictions designers need to be aware of is that their design must be realistic, as Viesso intends to build the winning design, and that it must be absolutely original.

Viesso is a modern furniture company whose line of custom sofas and sectionals are built in Los Angeles one at time after each order is placed and are made in only three weeks.

For more information on The People’s Sofa Contest, please contact co-founder Travis Nagle by calling (310) 453-3604 or sending an email to travis(at)viesso(dot)com.