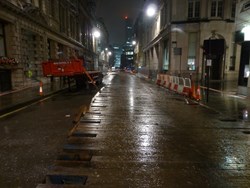 Temporary roadways with access ramps at either end can be used to keep traffic moving across otherwise inaccessible routes,

With many local authorities carrying out improvements to the transport infrastructure, thanks to the Chancellor’s pledge in the Autumn Statement of 2012, to invest an additional £1 billion in this spending review period to improve the national road network and to accelerate the development and delivery of major road schemes, the UK is currently home to a staggering 19,000 sets of roads works.

But, John Roberts, Managing Director of Timbermat Ltd, believes that with the correct strategic measures put in place by contractors and engineers, such delays can be kept to an absolute minimum.

"Raised or slightly elevated temporary roadways with access ramps at either end can be used to keep traffic moving across otherwise inaccessible routes, while bog mats and timber mats can be used where substandard or unstable ground conditions can halt work, causing extended road closures and further disruption to motorists," said John.