The founder of The Whole Truth Project, Andrew Hale of Andrew M. Hale & Associates, introduced Thank a Police Officer Day last year and it was a great success. This year, on September 21, citizens can help to carry on the tradition by letting the police officers in their communities know how much they are appreciated. 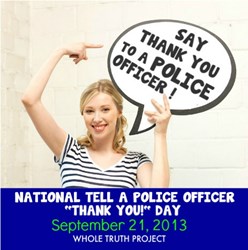 We want people to show their appreciation for the job that the brave men and women of law enforcement do every day.

According to The Whole Truth Project, an organization with a mission to support law enforcement officers by promoting a pro-police message, those who deserve our respect the most are often also the most harshly criticized and underappreciated. That is why last year they began the first of its kind project and launched a nationwide holiday to take place the third Saturday in September each year. Thank a Police Officer Day is a chance to celebrate law enforcement officers and all the hard work they do in service to this country.

“We want people to show their appreciation for the job that the brave men and women of law enforcement do every day,” said attorney and project founder Andrew Hale of Andrew M. Hale & Associates. “Having represented police officers for several years, I know the difficult job these men and women undertake every day and I think we often take our police officers for granted. We must show support and appreciation for those that serve and protect us."

On September 21, 2013, the second annual Thank a Police Officer Day will commence. The goal: a big show of support for police officers across the country. Citizens are being encouraged, on September 21, to take a moment out of their day to show appreciation for their local law enforcement officers by simply saying thank you.

This year, Mr. Hale challenges communities to get creative and to spread the word about this cause among their neighbors and friends through small acts of gratitude. Last year businesses showed their support by offering free perks to police officers who visited their businesses, or providing special discounts.

Hale, whose Chicago-based law firm has represented police officers in numerous high profile cases, points out how media reports of officer wrongdoing are usually not the whole story and tend to unjustly taint the hard work and dedication of the vast majority of police officers.

“A few ‘bad apple’ police officers do not spoil the whole tree. The overwhelming majority of police officers are dedicated and hard-working,” Hale said.
The Whole Truth Project is currently recruiting volunteers across the country to act as local “team captains” to help promote Thank a Police Officer Day and to get citizens and businesses involved in showing appreciation for their local police departments. Those interested should visit The Whole Truth Project Facebook page for more information.