United States Savings Bonds are becoming very collectible since the U.S. Treasury is no longer issuing them in paper form. Most bonds have been redeemed and destroyed. 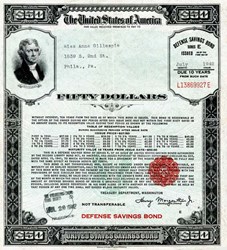 Scripophily.com ®, the Internet’s largest buyer and seller of collectible stock and bond certificates, has launched a separate section of its website for authentic United States Savings Bonds. Savings bonds are debt securities issued by the U.S. Department of the Treasury to help pay for the U.S. government’s borrowing needs. U.S. savings bonds are considered one of the safest investments because they are backed by the full faith and credit of the U.S. government.

On February 1, 1935, President Franklin D. Roosevelt signed legislation that allowed the U.S. Department of the Treasury to sell Savings Bonds. These financial instruments were considered patriotic to buy and became extremely popular during World War II. They were initially called Defense Bonds, but after the attack on Pearl harbor, they were called War Bonds. Even after the war ended, Savings Bonds were popular among American families. During WWII, Government Bond rallies were held throughout the country with famous celebrities to help promote the bonds and the war effort. Free movie days were held in theaters nationwide with a bond purchase as the admission. Disney certificates were issued as premiums to purchasers of U.S. WWII savings bonds.

The bonds were originally issued on paper, but now they are only issued in electronic form. The physical size of the bond was reduced in 1944 to save paper and money. Towards the end of the war, the bonds were renamed Victory Bonds. Uncancelled registered Savings Bonds can only be redeemed by the person(s) whose name they were issued.

Stock and bond certificates are collected because of their historical significance, beauty and artwork, autographs, notoriety, as well as many other factors. The supply of new certificates reaching the collector market has been substantially reduced due to changes in state laws and stock exchanges rules. Many companies are no longer required to issue physical stock and bond certificates, which is a process called “dematerialization”.

The company also offers an old stock research service at OldCompany.com to help determine redeemable value. In addition, the company offers high resolution scans for publications. Scripophily.com /Old Company Research Service is the successor company to all material published by the Marvyn Scudders Manuals, the Robert D. Fisher Manuals, and the Herzog & Co., Inc. obsolete research services, which have been performed continuously since 1880. We are the leading provider of authentic stock certificates, autographs, and old company stock research services.

Scripophily.com was founded by Internet Pioneer, Bob Kerstein (Bob.com). Bob is a CPA and CGMA, and has more than 37 years of senior management experience in the Cellular, Cable TV, Satellite, Internet, Professional Sports and Entertainment Industries. Bob is also the President of the Professional Scripophily Traders Association (PSTA).

In 1944, the bond size was reduced to save paper for the war effort

Scripophily is the name of the hobby of collecting stock and bond certificates.