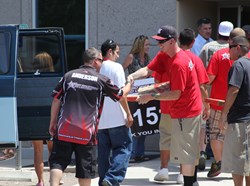 A testament to what we hold true and that is if you create the best technology and listen to your consumer first, your company growth will reflect it later.

Rigid Industries LED Lighting, the world leader in forward projecting LED lighting via its patented optics systems is proud to announce its 2013 ranking at 151 on Inc. Magazine’s 500|5000 Fastest Growing Companies list. Additionally, Rigid leads the industry as the fastest growing LED lighting manufacturer and the fifth fastest growing in overall manufacturing in the U.S., proving to be one of the most innovative and moving companies of 2013. From 2009 – 2012, Rigid experienced an exponential growth rate of 2,528% and reached a lucrative $24.1 million in 2012.

Rigid Industries inspiring story started in 2004 in a garage and in 2009 still only had 6 employees. Today, it owns two manufacturing facilities in Gilbert and Mesa, Arizona and employs over 140 personnel and ships to over 141 countries around the world.

"Rigid owes this all to its loyal people of the Rigid Nation and its distributors, dealers, manufacturing representatives, vendors, and suppliers who have all stepped up to turn out better products faster to meet the demand. The fast growth is a testament to what we hold true and that is if you create the best technology and listen to your consumer first, your company growth will reflect it later," says Jason Christiansen, President / CEO of Rigid Industries.

The owners of Rigid Industries LED Lighting shared the news with their employees with 151 balloons, 151 pizzas so every employee can take dinner home to their family, and 151 handwritten thank you cards with gift cards to their employees.

"The continual innovation of new and ever increasingly better technology is our mission and we reinvent ourselves everyday as we are doing this week with our patent pending Recoil Light Bar whose arc takes our traditional light bar and adds a constant radius making a wider reach of light with incredible distance projected. We are the leader in forward projecting LED and now forward projecting while delivering side spread. In the future, we may have to say leader in every direction LED lighting," states Mr. Christiansen.

The 2013 Inc. 500 is ranked according to percentage revenue growth when comparing 2009 to 2012. To qualify, companies must have been founded and generating revenue by March 31, 2009, and have revenue no less than $2 million in 2012. Additionally, they had to be U.S.-based, privately held, for profit, and independent. For complete results of the Inc. 500, visit http://www.inc.com/profile/rigid-industries

Thanks to its unparalleled patented Hybrid and Specter optics and its torture-tested housings, Rigid Industries® is a world leader in the forward projecting LED lighting industry. Rigid LED lighting products can be used in a plethora of applications across industries such as: agriculture, construction, emergency response, industrial, marine, military, mining, and, of course, off-road and power sports. Rigid Industries® is committed to providing top-notch innovative technologies and always guarantees a quality product which has been designed, engineered, and assembled in the USA. For more information and a comprehensive list of products, visit http://www.rigidindustries.com or follow the company on Facebook, LinkedIn, and Twitter.