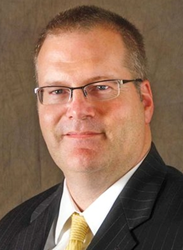 Convocation brings all SLCC faculty, staff, and employees together for the College’s celebration of the new academic year the day before Fall semester classes begin.

2013 Legislative Champion Stephen H. Urquhart is a member of the Utah State Senate, serving as Co-chair of the Higher Education Sub-appropriations Committee. Prior to his election to his current position, he was was a member of the Utah House of Representatives from 2001 to 2008, serving as Majority Whip and Rules Chair. Born and raised in Houston, Texas he received his a bachelor’s degree in biology from Williams College and his law degree from BYU Law School, where he was a member of Law Review and an honors graduate. He currently has his own law firm in St. George, Utah.

In his appropriations role, Urquart routinely visits all Utah public colleges and universities, and helps set the direction for the Utah System of Higher Education. Urquhart is working to move Utah higher education funding to an “outcome-based” model, focusing on increased graduation rates and improved marketplace alignment.

Keynote speaker Sekou Andrews is a two-time winner of the National Poetry Slam Championship. He has received multiple Helen Hayes Award nominations for his spoken word performance and performed at the Pasadena Pops Orchestra summer series, the Marian Anderson Awards and the 2009 Inaugural Peace Ball, as well as private events for President Barack Obama and Hillary Clinton.

Andrews is a graduate of the Duke Ellington School of the Arts, the Georgetown Day School, and Pitzer College, where he received his B.A. in Sociology.

Salt Lake Community College is an accredited, student-focused, urban college meeting the diverse needs of the Salt Lake community. Home to more than 62,000 students each year, the College is the largest supplier of workforce development programs in the State of Utah. The College is the sole provider of applied technology courses in the Salt Lake area, with 13 sites, an eCampus, and nearly 1,000 continuing education sites located throughout the Salt Lake valley. Personal attention from an excellent faculty is paramount at the College, which maintains a student-to-teacher ratio of less than 20 to 1.