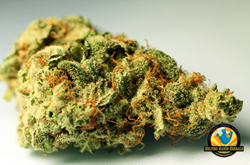 Gupta Kush imparts a very relaxing state that calms the mind without compromising clarity. When the mind is quiet and happy, people allow themselves to heal. Medical marijuana helps make that happen.

“Dr. Gupta's recent reporting on marijuana puts him at the forefront of the medical cannabis movement, and we thought what better way to honor his efforts than by giving him his own strain. We’d like to ensure he remains part of the annals of cannabis culture, and now he will," says Jeff Kless, owner of Helping Hands Herbals Dispensary in Boulder, Colorado.

“Considering this new strain is grown organically in Boulder, which has a strong marijuana culture and is ranked the healthiest place in America, we think it’s a great fit."

“We selected the strain carefully,” says Kless, “choosing one for those who suffer from debilitating medical conditions such as cancer, MS, severe pain, nausea, anxiety and wasting, and need physical and mental recovery without the use of pharmaceuticals – or for those transitioning off pain medication.”

"Gupta Kush imparts a very relaxing state that calms the mind without compromising clarity. When the mind is quiet and happy, people allow themselves to heal. Medical marijuana helps that happen."

For the body, Gupta Kush is an excellent pain and tension reliever, "causing waves of relaxation to move through the body, calming nerves, and allowing the user to get some deep conscious rest before drifting off to sleep,” says Kless.

“The political and health establishments now realize that cannabis has genuine medical benefits, which we’ve been saying for years. By naming a cannabis strain after Dr. Gupta, this is our way of tipping our hat and honoring him for taking such a firm, science-based stance on behalf of marijuana as 'real' medicine. He is confirming what our patients have been saying for years. Marijuana is hardly folk medicine."

Gupta Kush is an indica strain with its origins in the Hindu Kush mountains of South Asia, the reported birthplace of some of the world’s oldest and most potent cannabis strains. It has a rich green color hidden beneath a deep layer of trichomes, and a thick, hashy, floral taste. Onset is immediate and effects are long-lasting.

Gupta Kush is available only at Helping Hands Herbals in Boulder to those who have a Colorado state-issued medical marijuana license, or “Red Card.”

Helping Hands Herbals is a medical marijuana dispensary located in the heart of Boulder, Colorado, at 1021 Pearl St. B, 80302, and was one of the first dispensaries to open in Colorado. In business since 2009, Helping Hands grows all of its own cannabis organically in soil and provides medical marijuana and infused edibles to qualified patients and US military veterans from throughout Colorado.

They are consistently ranked one of the best MMJ dispensaries in Boulder. Their weekly newsletter is sent to more than 1,200 medical marijuana patients and their online cannabis strain-library is an educational tool unique to the industry. Their new strain has not been endorsed by Dr. Gupta.