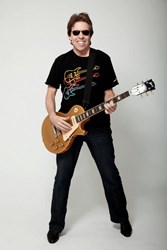 When you do Chuck Berry and Bo Diddley, when you play Muddy Waters and Howlin’ Wolf, there’s no experimenting,” Thorogood explains. “That’s a religion, and you’ve gotta do it right.

2120 South Michigan Avenue, home of Chicago’s Chess Records, may be the most important address in the bloodline of the blues and rock ‘n’ roll. That address – immortalized in the Rolling Stones’ like-named instrumental, recorded at an epochal session at Chess in June 1964 and included on the band’s album 12 X 5 – serves as the title to George Thorogood’s electrifying Capitol/EMI salute to the Chess label and its immortal artists.

Thorogood has been essaying the Chess repertoire since his 1977 debut album, which included songs by Elmore James and Bo Diddley that originated on the label. He has cut 18 Chess covers over the years; three appeared on his last studio release, 2009’s The Dirty Dozen. On 2120 South Michigan Avenue, he offers a full-length homage to the label that bred his style with interpretations of 10 Chess classics. Through the entire project, Thorogood and the Destroyers attempted to put their own distinctive spin on the Chess material while maintaining fidelity to the originals’ attack.

“When you do Chuck Berry and Bo Diddley, when you play Muddy Waters and Howlin’ Wolf, there’s no experimenting,” Thorogood explains. “That’s a religion, and you’ve gotta do it right.”

The historic music heard on 2120 South Michigan Avenue didn’t merely change George Thorogood’s life, as he himself notes.“It’s not a musical phenomenon, it’s a social phenomenon. The man who created rock ‘n’ roll was Chuck Berry, and he listened to Muddy Waters. Bo Diddley went to the same school and listened to the same people. Rock ‘n’ roll changed the whole world. That never would have happened if it hadn’t been for Chess Records. It’s the source of the whole thing.”