To help new and experienced guitarists master advanced rhythm guitar techniques, GuitarControl.com released a new video lesson demonstrating a riff by guitar virtuoso Steve Vai. The rhythm riff shown in the video is packed with useful techniques guitarists can use to achieve the unique, angular sound Vai is known for. 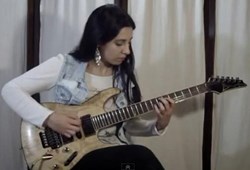 The rhythm lick demonstrated int his guitar lesson is the main rhythm from Steve Vai’s “The Crying Machine,” the second track on his 1996 album Fire Garden.

In the lesson, Guitar Control instructor Alejandra first plays the riff at full tempo, then slows it down to make it easy-to-follow and replicate for guitarists of all skill levels.

Alejandra plays the riff using both up-strokes and down-stokes and mimics Vai’s vibrato bends, hammer-ons, and slides to produce the sound immortalized over a stellar career. In addition to being a helpful rhythm lesson, this riff doubles as a useful exercise in exploring the neck of the guitar when playing rhythmically.

A link in the video description leads guitarists to the sheet music and tabulatures for this rhythm guitar lesson, which diagram which notes to play and the timing needed to master the riff shown. Guitarists are encouraged to practice the riff played in the lesson, and to use the techniques shows in the lesson to compose their own original rhythms and melodies.

The rhythm lick demonstrated in this guitar lesson is the main rhythm from Steve Vai’s “The Crying Machine,” the second track on his 1996 album Fire Garden. Vai was a master of guitar theory; his instrumental rock songs are often played in greek modes like Lydian, and he was known to mimic the human voice using only his guitar. The winner of three grammy awards, Vai is one of the most prolific guitarists in history. He’s released eight studio albums and eight live albums of his own, and has lent his talents to more than forty albums from other artists including Alice Cooper, Ozzy Osbourne, and David Lee Roth.

GuitarControl.com is packed with resources, video tutorials and lessons, articles, and affordable DVDs to help new guitarists learn and experienced guitarists master their instruments. Guitarists of any experience level find guitar lessons from instructors with a broad array of music backgrounds and styles - blues, jazz, metal, classical, folk, progressive rock, punk, and everything in between. Guitarists can find relatable, easy-to- follow videos regardless of their ability or musical tastes.