The 9th Annual National Dog Day will be celebrated on Monday, August 26th and has now gone international with events being celebrated in the U.K. and Italy! 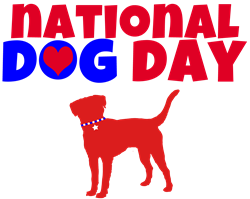 I created National Dog Day in the wake of September 11th, in response to the sheer lack of publicity and honor given to the dogs who gave so much of themselves to rescue and recover the victims of our country's greatest tragedy.

National Dog Day, founded in 2004 by Pet Lifestyle Expert, Animal Behaviorist and Author, Colleen Paige, and sanctioned by the Animal Miracle Network, is once again going to the dogs in celebration on Monday, August 26th. With 2013 events in countries such as the U.K., and several planned for the 10th anniversary next year in places like New Zealand, England, Italy and Spain, National Dog Day has become “International” Dog Day, focusing on the wonderment of dogs and the need for adoption across the globe. It is estimated that this special day has saved over a million lives through its celebratory events by businesses, and rescues and promotion through friends and partners such as Petcentric, 1-800-Flowers, Crayola, Target, Disney, PetSmart and many more.

The newest partner to jump on board this original and celebrated holiday for dogs is DOGTV, which is scientifically developed and Pup-approved. DOGTV is the first television network for dogs that is created exclusively for canines and the humans who love them. DOGTV’s 24/7 programing helps stimulate, entertain, relax and habituate dogs with shows that expose them to various movements, sounds, objects, experiences and behavior patterns - all from a dog’s point of view.

National Dog Day has also hit an all-time high with new legislation being adopted in New York State, introduced into the Senate, to Commemorate August 26th as National Dog Day. Founder Colleen Paige says, “I am so honored to have my special day for dogs adopted into NY legislation that I can hardly contain myself. It’s so fitting, coming up on our 10th anniversary next year; it all started in New York. I created National Dog Day in the wake of September 11th, in response to the sheer lack of publicity and honor given to the dogs who gave so much of themselves to rescue and recover the victims of our country's greatest tragedy. I was looking at a coffee table book published by a very well-known publisher that was in memory of September 11th and there was not one single dog featured. I knew that over 300 search and rescue dogs had been used at ground zero and not one of them received any recognition in this book. I started searching the web and there was so little recognition that it left me in tears. I knew I had to do something for them, to honor them for all they do every single day to keep our streets and our country safe, to assist the blind and lame and to give comfort and unconditional love to those who will accept it. National Dog Day is their day, and I ask everyone to consider adopting a dog instead of buying from a backyard breeder or pet store and to donate at least $5 to their local animal shelter or rescue on August 26th.”

Always on the lookout for yet another way to save animals, Paige is launching a new magazine, the official magazine of National Dog Day aptly named “Dog Day”. Dog Day Magazine, launching December 1st, 2013, will feature high quality professional photography of dogs in no-kill shelters and rescues awaiting new homes with an emphasis on dogs that have been orphaned the longest. Other content will include doggie design tips, informative and funny articles, featured pet products, cooking for your dog, pet friendly travel destinations, and so much more. Dog Day magazine will have no subscription fee and will be delivered in digital “flipping page” format so it can be viewed across the vast electronic universe of cell phones, iPads and social media platforms by dog lovers around the globe. Dog Day will donate a portion of profits every year to a rescue that has been featured in its pages and will offer free ad space to professional photographers who donate their time to their local animal rescue so as to feature their dogs for placement in the publication.