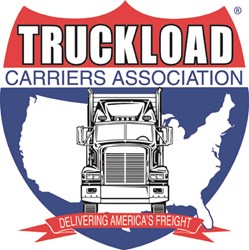 Today, at the TravelCenters of America / Petro Stopping Centers (TA/Petro) booth on the exhibit floor of the Great American Trucking Show in Dallas, Texas, the Truckload Carriers Association (TCA) announced the winners of the 3rd North American Battle of Trucking’s Weight Loss Showdown. Halvor Lines, Inc., of Superior, Wisconsin, swept the competition, with its team winning the company contest and one of its driver managers, Keith Kitch, also a resident of Superior, Wisconsin, taking the top honor for individuals.

Trucking’s Weight Loss Showdown is managed by Lindora Clinic, a personalized weight management company. It addresses the trucking industry’s weight problems and related medical conditions in an innovative fashion, through friendly and informative competition. Teams of 12 professional drivers and office staff from six carriers worked hard to determine which company and which individual could achieve the greatest percentages of weight loss. Over a 10-week period that started in June, participants followed the Lean for Life program, a moderate-carbohydrate, low-fat, moderate-protein menu plan that is coupled with exercise, nutrition education, and lifestyle changes. The competitors received weekly phone calls from Lindora’s coaches, who educated them on nutrition and behavioral changes, helped boost their morale, supported them through their personal challenges, and recorded their weight loss.

Team Halvor Lines lost a total collective weight of 380 pounds. This represented a 13.2 percent drop in the team’s combined weight. All 12 members of the team lost 5 percent or greater of their starting body weight. To congratulate them for working so hard, Halvor Lines will be receiving $11,000 worth of Lindora Clinic’s services, donated by TA/Petro of Westlake, Ohio.

Becca Mathews, the health and wellness coordinator for Halvor Lines, Inc., said, “We are so grateful that we were chosen to compete in this Showdown. Our thanks go to both Cline Wood Agency and TA/Petro for their generous prizes. We plan to use the team’s prize for future wellness programs here at Halvor Lines, as we are committed to building a strong culture of safety and health improvement for our employees.”

According to Mathews, since only 12 people could participate on the company’s official Showdown team, Halvor Lines began an internal weight-loss challenge earlier this year that was open to anyone. She stated that 730 pounds were shed throughout the entire company, including the weight lost by the official team. “Our ultimate goal is to lose 1,000 pounds by the end of this year. The Showdown has given us the opportunity to showcase our commitment to provide health resources and initiatives for all our employees and their families,” she said.

Kitch, the individual winner, said that he was proud of himself for managing to stick to the Lean for Life program even during his daughter’s graduation party, which featured delicious tacos and a cake. Kitch got through it by eating a protein bar. His dedication resulted in a loss of 22.4 percent of his starting body weight, surpassing all the other Showdown participants. To celebrate this achievement, Kitch will receive $2,500 from the sponsor of the individual contest, Cline Wood Agency of Leawood, Kansas.

Kitch said, “I’ve been off and on trying to lose weight for over 20 years. I’m the kind of guy who likes to see results quickly. I originally set a pretty low weight-loss goal, but after the first week, I had already lost 10.5 pounds! I thought, ‘I have a chance at this.’ After week 3, I had lost 16-17 pounds, so I raised my expectations much higher. My co-workers helped a lot – we really pushed each other.”

Overall, 72 people – 44 drivers and 28 staff – participated in the third Showdown. Between all of them, 1,604.5 pounds were shed. On average, all teams lost about 9.8 percent of their collective weight, and 54 individuals – or 75 percent – lost 5 percent or more of their starting body weight.

For more details about the competition, please visit http://www.TruckingsWeightLossShowdown.com.