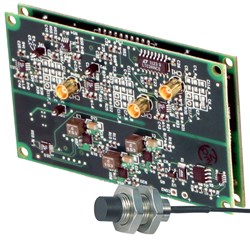 Wireless eddy-current sensor electronics can be embedded in machines.

Wireless capabilities have now been brought to precision noncontact displacement sensors by Lion Precision. The company has adapted its high-performance eddy-current sensors to use a wireless interface for measurement data. Machine designers and production engineers will benefit from remote measurement of production variables and machine performance. The wireless system is particularly useful when they must be installed in difficult to access areas. When using Wi-Fi technology, the sensors are capable of very high data streaming speeds for real-time monitoring of position and displacement in high-speed operations. Other wireless interfaces are also possible such as Bluetooth and Zigbee but at slower data transfer rates.

Lion Precision eddy-current sensors measure position changes of conductive metal targets over ranges from 0.25 mm to 15 mm with measurement resolutions as low as 10 nanometers. These levels of precision are required in many manufacturing environments including semiconductor processing, motion control, aerospace, precision metal manufacturing and computer disk drive production. Traditional wired systems require that data acquisition be performed near the sensor system via connecting cables. Increasing the length of the connecting cables can degrade the high-precision performance of the system making implementation difficult in some applications.

The wireless system is a printed circuit board intended for OEM use by machine manufacturers. The system can use the standard Lion Precision eddy-current probes with similar performance to the ECL202, the company’s highest performance eddy-current displacement sensor.

In 1958, Lion Precision was the first company to provide capacitive noncontact displacement sensors to industry. The company has expanded its product offering to include eddy-current displacement sensors and some application specific sensors for the machine tool, packaging and PCB industries. Lion Precision is focused on assisting users in sensor implementation by providing technical knowledge resources, expert guidance and optimized systems including custom designs.