Writer, Publisher and Filmmaker Spearheads Effort to Promote Awareness of the Battle Against Internet Book Piracy - from Changemakers

Since the Internet has disrupted traditional publishing and contributed to rampant piracy of scanned books and digital files, a new book and film – The Battle Against Internet Piracy – has been written by writer, publisher and indie filmmaker Gini Graham Scott to deal with this issue. The book describes the multi-billion dollar problem affecting millions of writers and publishers and what to do about it, while the film of the same name features the stories of several writers and publishers, describes what they did, and offers different solutions ranging from education to new technology models suggested by lawyers, technologists and other experts. 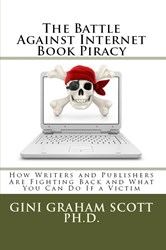 The Battle Against Internet Book Piracy

Internet book piracy is costing writers and publishers over $3 billion a year in lost sales.

The problem of Internet book piracy is one that affects millions of writers and publishers who find that their books have been scanned or their digital files have been copied. Then, these files are uploaded to hundreds of websites, which feature pirated works or combine them with legitimate uploads. The losses to writers and publishers due to piracy are estimated at over $3 billion a year.

The author of over 50 books, Gini Graham Scott, became interested in the piracy issue after discovering 18 of her books were featured on a website offering free electronic books. Though a publisher of nine of her books thought they could do little except send a take-down notice, Scott began researching the issue. She discovered the actions of the FBI, other government agencies, and a few publishers in going after the pirates through criminal prosecutions and civil litigation, and she began writing a series of articles which turned into the book: The Battle Against Internet Book Piracy.

The book describes the extent of the problem and discusses some of the strategies and laws used to deal with Internet piracy, based on the civil and criminal penalties for copyright infringement. The book describes the use of take-down notices to the website owner and service provider and some efforts used to go after uploaders and downloaders of pirated copy. It concludes with a chapter on what individuals can do if they discover their own work has been pirated.

The Battle Against Internet Book Piracy documentary inspired by the book has just been filmed and will be released in November as one or two 20-minute short films. The film features interviews with a dozen writers and publishers who experienced book piracy and describe what happened, how they discovered the piracy, the damages they experienced, and what they did about it. The film also includes interviews with lawyers, technologists, other experts, and some researchers who have used pirated materials discussing the problem and suggesting alternatives. For example, one suggestion includes educating the pirates about the damages to writers and publishers; other suggestions include creating alternate models to make it easier and less expensive for everyone to legitimately obtain digital books and compensate writers.

Besides writing the book and producing the film, Scott has launched a campaign to Stop Book Piracy, which is featured on Facebook. The campaign has received a tremendous response – one Stop Book Piracy post received over 1,100 views in a few hours.

Gini Graham Scott is the founder of Changemakers Publishing and Writing and the author of over 50 published books with major companies, as well as 30 books published by her own company Changemakers Publishing. She also writes books and scripts for clients. She has spoken about the topics of her books to many groups and the media, including appearances on Good Morning America, Oprah, and CNN. She received a Ph.D. in Sociology from the University of California in Berkeley, a J.D. from the University of San Francisco Law School, and M.A.s in Anthropology, Mass Communications and Organizational/Consumer/Audience Behavior and Popular Culture and Lifestyles, and a M.S. in Recreation and Tourism at California State University, East Bay. She will be pursuing an MA in Communications there beginning in September 2013.

The film crew films a lawyer who deals with copyright issuesIn the interview, the lawyer is proposing a new approach to dealing with piracy by using it to drive traffic to one's website.

The film crew sets up cameras to interview a researcher who works with digital files from the InternetOften the researcher is unaware whether materials online are pirated or not; if there were notices he wouldn't download pirated material.

The film crew sets up the camera and lighting equipment in a conference room.The interview is with a free speech activist interested in protecting free speech rights in the battle against Internet book piracy

The film crew sets up the lighting for a scene with the authors and publishers of a book.The book which is often pirated is about licensing music rights for musicians.

Gini Graham ScottRelaxing at the end of a day of writing