The 9th edition of this year’s epic mountain bike race "Vuelta al Cotopaxi" is coming nearer: the only race in the world around an active volcano. Gulliver Expeditions prepares specially designed acclimatization programs for the racers to get used to the altitude, to prepare themselves for the challenge and to get to know the area around the volcano Cotopaxi. 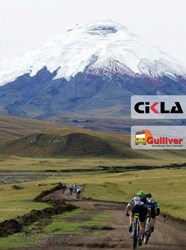 It is a tough and long competition, demanding endurance, willpower and acclimatization.

The date is set: on 16/17 November 2013, about 500 cyclists will race around Ecuador’s iconic volcano Cotopaxi. It will be the 9th edition of a great endurance mountain biking race, which is already well known in and around Ecuador and said to be one of the best races in the world. The "Vuelta al Cotopaxi" is the first and only race around an active volcano, lasting two days, each day covering 60 to 70km.

A Race of Endurance, Willpower and Acclimatization

Since 2005, the best and toughest cyclists come together in the Cotopaxi National Park to enjoy two days of extreme cycling and to push themselves beyond their limits of endurance. It is a tough and long competition, demanding endurance, willpower and, really important in the highlands, acclimatization.
Besides pedalling a way around the volcano, the steep path sometimes asks the cyclist to get off their bikes, push it beside them or swing it onto their backs and clamber the mountain by foot. The race leads approximately 130km over dirt tracks, sandy paths, rivers, mud pools and fields. But the toughest part of the competition is not only the harsh area, it is the biggest enemy of a sportsman, which makes it a rough race: the high altitude of Ecuador’s Andes. The competition is held in altitudes between 3,000m and 4,200m (9,842 - 13,779ft), which brings some extra roughness into the extraordinary and breath-taking cycling race.

Racers will find themselves in one of the most beautiful sceneries the Ecuadorian Andes have to offer. With views to the majestic Cotopaxi and other volcanoes around, the racers will be highly rewarded for their efforts. After day one of the challenge, the competitors set camp under a star-filled sky, surrounded by the peaks of the volcanoes, and will be indulged with food and beverages by the organizers.

This mountain bike challenge attracts hundreds of international teams to race against each other. In the last few years, teams from all over the world participated: USA, Germany, Belgium, Spain, Israel, Venezuela and Brazil, to name a few. As spaces are limited, the Ministry of Tourism of Ecuador saves up some special places just for international teams, to keep up the transnational ambiance. Also the prizes are sponsored by the Ministry of Tourism.

This epic two-days race is planned and organized by CIKLA, an Ecuadorian mountain bike organization. The cyclists register in teams of two and then will be categorized in five groups: men, mixed, women, master and super master, depending on sex or age. Details about the route will be revealed only a week beforehand, thus on 11. November 2013.

Training in the "Avenue of the Volcanoes"

To be perfectly prepared for this race, Gulliver Expeditions now presents special acclimatization and training programs for those wanting to participate. The itineraries are specifically designed for cyclists to gain expertise, to grow strength and to prepare themselves for the altitude in the middle of the "Avenue of the Volcanoes". During five to eight days, the participants will explore the area, enjoy the amazing Andean landscapes, improve their endurance and get mechanic and maintenance training. Throughout the program, the participants will enjoy comfortable and luxurious lodgings on 3,200m, which is the perfect base for any activity in the Andes. The preparation package is also a prevention for any negative effects of the altitude, which might occur, such as altitude illness, HAPE (high altitude pulmonary edema) and HACE (high altitude cerebral edema).

After the acclimatization program, Gulliver Expeditions offers transportation service to bring the cyclists directly to the starting point of this epic race.

Online ticket booths are open until 11. September 2013. More information about the race and registration form are to be found on http://www.cotopaxi.cikla.net.

Gulliver Expeditions, a Quito based tour operator and agency, specializes in tours through all of Ecuador, from the coast, over the highlands, to the jungle and also the Galápagos.

They offer tours from adventurous to luxurious, such as climbing and hiking tours in the Avenue of the Volcanoes, cultural sightseeing, biking tours, horseback riding, jungle trips and once-in-a-lifetime cruises to the Galápagos Islands, as well as tailor-made itineraries for trips across the whole country.

For more information contact Gulliver on http://www.gulliver.com.ec or mail to info(at)gulliver(dot)com(dot)ec.