The Cormac McCarthy Society Announces the Second Volume in its Casebook Series, "They Rode On: Blood Meridian and the Tragedy of the American West"

The Cormac McCarthy Society has released the second volume of its Casebook series, They Rode On: Blood Meridian and the Tragedy of the American West, a critical anthology by a select group of international scholars and critics concerning McCarthy's most controversial work. The Society plans additional volumes over the coming two years to cover each of McCarthy's novels and plays. 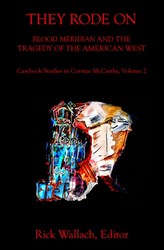 They Rode On: Blood Meridian and the Tragedy of the American West

When it was first published in 1985, Cormac McCarthy’s troubling fifth novel alienated mainstream critics and horrified casual readers with its relentless brutality—and transfixed others with its Biblical prose cadences.

The Cormac McCarthy Society announces the second volume in its new casebook series, "They Rode On: Blood Meridian and the Tragedy of the American West."

This full length volume of critical appreciations of McCarthy's most controversial work, called "the greatest novel by a living American writer" by renowned critic Harold Bloom, offers complete and balanced assessments of this important historical novel by an international collection of scholars and critics. The Casebook Studies in Cormac McCarthy are designed to interest McCarthy’s worldwide legions of fans and lay readers as well as scholars and students.

This casebook volume explores the author’s fifth novel. Despite the high praise afforded other works of his like The Road, The Sunset Limited and All the Pretty Horses, many still consider it to be his masterpiece. Blood Meridian is the fictionalized account of the Glanton Gang, a group of vicious freebooters who worked as scalp hunters for the Mexican government after the Mexican-American war, slaughtering Indians to clear the land for cattle raising and mining. The novel is loosely based on the 19th-century memoirs of Union Army general Samuel Chamberlain, who rode with the gang as a teenager. McCarthy brilliantly overturns many of our most cherished myths about the "Old West" here, and the book has been widely credited with launching an entire generation of "revisionist" western films and novels.

Each casebook in the series will combine in-depth historical information with detailed considerations of McCarthy’s ten published novels, two plays and screenplays. The Cormac McCarthy Society will publish the third volume, "Beyond Borders: Cormac McCarthy's All the Pretty Horses, " in the spring of 2014.

The Cormac McCarthy Society is an independent nonprofit educational organization not affiliated in any way with the author, his publishers or his agents. Founded in 1993 by a group of fans and scholars for the purpose of studying the author’s works and the literatures of the Appalachia, the American South and Southwest, the Society will open its third decade in July 2014 at its fifth international conference at the University of Western Sydney in Sydney, Australia.
.
For more information about this new casebook series, the Society and its many activities, please visit our web site at http://www.cormacmccarthy.com, or contact Rick Wallach, the Secretary of the Society, at info(at)cormacmccarthy(dot)com.