Gophermods is proud to announce that they are now offering the Samsung Galaxy S4 Active Repair now for only $249. The new repair service offers an opportunity for an even more affordable solution service when your Galaxy S4 breaks. 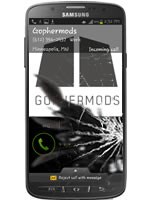 Ever tried sliding your smartphone into your pocket only to miss it entirely and watch as your screen cracks against the floor? This is a situation most smartphone users deal with far too often, which is why Gophermods is excited to offer the new Samsung Galaxy S4 Active repair to our portfolio of Samsung Galaxy Repair services.

The Galaxy S4 Active screen repair will start at $249 and will consist of a removal and replacement of the Gorilla Glass 3 outer layer, display and front housing with bezel. The service includes all parts, labor and round trip UPS ground shipping, as well as a Gophermods standard one-year warranty.

Minneapolis branch manager Kai Hagberg stated, "We’re excited to offer the S4 Active Repair," and explains, "The screen replaced is direct from Samsung, meaning your phone will be as good as the day you purchased it. With this OEM quality, the repair will not infringe upon the S4 Active’s water proof capabilities.”

As of August, Gophermods will be the only company offering the Galaxy S4 Active repair on a nationwide scale. It will be featured in their Minneapolis store locations and offered through nationwide mail programs.

Fear your phone might be too damaged? Galaxy S4 screens hold up to incredible forces, but it is important to note that in some instances, the LCD display is broken, too. In these situations, Gophermods customers need not worry, the Galaxy S4 Active repair include a brand new display. Furthermore, Gophermods has a water damage solution for the Active, starting at $49.99.

All this repair talk is great, but what if insurance was purchased? Most insurance deductibles are more than $159.99 to $199.99, it is best to use a one-time insurance policy on a complete phone replacement when phones are lost or stolen.

Have any questions about the new Samsung Galaxy S4 Active repair service? Feel free to contact Gophermods customer service at 612-354-2937 with any questions.

Gophermods is a Minneapolis-based company that specializes in consumer electronics repair. Each year, Gophermods repairs thousands of consumer devices with OEM parts and professional know-how. Gophermods is the one stop shop for full-service game console, iPad, iPhone, iPod and Smartphone repairs.