The new interpretive mule ride features breathtaking views of the East Rim of the Grand Canyon. 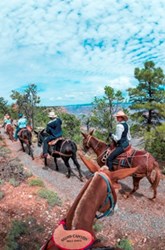 Mules have long been an important part of the Grand Canyon’s rich history, and these large, sturdy creatures have been a valuable and much-loved traveler attraction since they were first offered to visitors in 1887.

For the first time in 116 years, Grand Canyon mule-riders will be able to take in the breathtaking vistas of Grand Canyon National Park while traveling along the rim of the canyon. Concessioner Xanterra South Rim is offering a new four-mile, three-hour mule ride that departs five miles east of the historic Grand Canyon Village in the park. The interpretive Canyon Vistas Mule Ride replaces the Abyss Overlook Mule Ride that had been operated since October 2009.

The mule ride includes two hours in the saddle plus an interpretive van ride from the Grand Canyon Village to the Yaki Barn – the point where mules depart – and back. The mule riders travel along a new East Rim Trail built by the National Park Service. Wranglers stop six times along the trail to provide interpretive information about the geologic formations, human history, fire ecology and more.

“Mules have long been an important part of the Grand Canyon’s rich history, and these large, sturdy creatures have been a valuable and much-loved traveler attraction since they were first offered to visitors in 1887,” said Jon Streit, general manager of Xanterra South Rim, operator of mule rides, overnight accommodations, restaurants and activities in Grand Canyon National Park. “We are indebted to the National Park Service for its enthusiasm and hard work in creating this new trail and assisting with the development of the interpretive material.”

The interpretive mule ride is offered at the Yaki Barn up to two times each day for rides for up to 20 riders per departure. The mule ride follows the new East Rim Trail where guides discuss various geologic formations, the Colorado River where John Wesley Powell made his successful navigation in 1869, the area’s native peoples, the surrounding forest and more.

Riders must check in at the Bright Angel Lodge’s transportation desk the day before or at least two hours before departure time on the day of their ride and then be at the main livery barn in Grand Canyon Village 30 minutes before departure. An interpretive van ride to the Yaki Barn and back is included in the ride.

All levels of riders are welcome, but they must weigh less than 225 pounds fully dressed and be least 4 feet, 7 inches tall. Each rider must be able to speak and understand fluent English and be in good physical condition. Long sleeve shirts, long pants, hats and close-toed shoes are required. Riders should not be afraid of heights or large animals. Riders cannot be pregnant.

In addition to the mule rides, Xanterra South Rim operates six lodges in Grand Canyon Village as well as a variety of interpretive motorcoach tours, restaurants and gift shops.

Sure-footed mules are particularly well-suited for traversing the Grand Canyon.

The three-hour ride includes interpretive stops for wranglers to discuss Grand Canyon topics such as geology and human history.

A mule waits for his turn to go to work at Grand Canyon National Park.