Doug and Sandra Williams, PhD, of Lost Creek Mushroom Farm, USA, are in Beijing for the 7th International Medicinal Mushroom Conference. Scientists, biotechnology engineers, mushroom producers, pharmacists and professionals from over 30 countries hear papers on mushroom research for human, animal, and plant health; and prevention and treatment against disease. 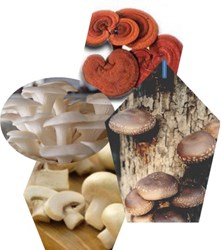 All edible mushrooms contain compounds that strengthen and improve our health. Mushrooms provide foods for good health, supplements for sub-health, and medicines for illness. We know this through human history and modern research.
Sandra Williams, PhD

“Mushrooms have a proven track record for health and healing in traditional medicine reaching back thousands of years. Now, in the 21st century, the fast-growing body of scientific study worldwide is confirming traditional knowledge, and moving far beyond, showing that edible and medicinal mushrooms have direct application to today's critical health issues.,” according to Sandra Williams, Ph.D., of Lost Creek Mushroom Farm. Dr. Williams is the director of Mushrooms in Ghana Project and The Voice of the Mushroom Foundation.

She was responding to the opening day of the 7th Medicinal Mushroom Conference. The conference, organized by the Chinese Academy of Engineering and the China Chamber of Commerce of Foodstuffs and Native Produce, takes place August 25-29 in Beijing, China.

Monday's keynote speakers were two of the most highly respected and experienced researchers in the field of medicinal mushrooms. Professor S. T. Chang, Australia, is working with the Centre for International Services to Mushroom Biotechnology, the Chinese University of Hong Kong. He spoke on edible and medicinal mushrooms and their impact on global human welfare.

Professor S. P. Wasser is with the Institute of Evolution and Department of Evolutionary and Environmental Biology, Faculty of Natural Sciences, University of Haifa, Israel. He also works with the N.G. Kholodny Institute of Botany, National Academy of Science of Ukraine in Kiev. Prof. Wasser spoke on the current status, future trends and challenges in medicinal mushroom research.

“Both speakers stressed the importance of public awareness of medicinal mushrooms and urged intensified research in mushrooms for the maintenance of health and the prevention and treatment of various diseases,” Williams said.

Prof. Chang quoted an old Chinese saying, “Illness enters from the mouth,” meaning that diseases come from the kinds of diets and the amounts of food we intake. He referred not only to poor nations with inadequate nutrition, but also to “wealthy diseases”: high blood pressure, heart diseases, diabetes, and cancer. Mushrooms have the capacity to increase health, decrease disease, and to improve diets and food supplies worldwide.

Dr. Williams explained, “To Wasser's list, I would add that some mushrooms have been shown to improve memory and cognitive function in dementia and Alzheimer's disease. Here at the conference, research on polysaccharides and other compounds with anti-tumor and anti-cancer properties seems to be the highest priority because cancer rates and types are rapidly increasing. Edible and medicinal mushrooms are not only showing effectiveness in cancer treatment, but can also be effective in preventing susceptibility to cancer.”

“Mushrooms are SuperFood!” Williams said. “Button mushrooms, portabellas, shiitakes, maitakes, matsutake, lion's mane, enoki, and more. In this list I include Ganoderma, also called Ling zhi and Reishi. It's not edible because it's too tough to eat, but it's available as tea and coffee, powder, capsules and other supplements. It works with the immune system and is very good for overall general health. This mushroom is showing profound effects in cancer treatment and research. A combination of reishi and shiitake concentrates has been used successfully to treat cancer in Japan since the 1970s and is used in the US to reduce the side effects of chemo and radiation.”

Prof. Chang said that health disadvantages, in addition to human suffering, “have economic consequences. They lead to higher costs for consumers and taxpayers as well as a workforce that is vulnerable to productivity losses. Mushrooms are a valuable health food and their derivatives are superior dietary supplements (nutriceuticals) which have beneficial effects on a wide range of human ailments.”

Mushrooms are a $30 billion business in China. Chang impressed on the international audience that China is a world leader, “the new powerhouse” in the mushroom industry. “In 2011, more than 300 million people in China were involved in mushroom-based agro-industrial business, more than 3,000 scientists were engaged in mushroom research, and more than 500 post-graduate students were working for their higher degrees in mushroom biology.”

“I have worked with mushrooms for 50 years,” he said. “I sincerely believe that mushrooms and mushroom products are beneficial to the human health.”