Train in Toronto with the best in mind-body exercise. 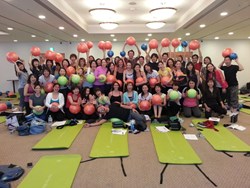 In 1988 at the beginning of this journey, we were training clients out of our Toronto studio apartment. Now the company has evolved to having trained almost 38,000 instructors around the world, 4,400 of them from Canada.

Merrithew Health & Fitness™ (MH&F) has been going around the world celebrating the 25th Anniversary of their premier brand, STOTT PILATES®, with the Merrithew Mindful Movement World Tour (#mmm2013) and will return home to Canada this December. Coming to Toronto December 13 - 15, this symposium provides fitness professionals and enthusiasts alike with first-class training in mind-body modalities plus a rare opportunity to work with MH&F Master Instructor Trainers who are some of the fitness industry’s most respected and inspirational names.

“It’s incredible to see the growing interest in mind-body fitness across the world,” says Lindsay G. Merrithew, CEO & President of Merrithew Health & Fitness. “In 1988 at the beginning of this journey, we were training clients out of our Toronto studio apartment. Now the company has evolved to having trained almost 38,000 instructors around the world, 4,400 of them from Canada. In addition to having an undisputed global presence, our Corporate Training Center in Toronto has grown to be an international leader attracting fitness professionals from every continent.”

“The Merrithew Mindful Movement World Tour is visiting 11 cities worldwide and the first half of the tour trained almost 500 instructors,” shares Moira Merrithew, Executive Director, Education. “Lindsay and I founded the company on the philosophy that effective and responsible exercise is the foundation to a better lifestyle. Twenty-five years of experience in evolving the STOTT PILATES method has allowed our team to develop three additional high-end branded education, Total Barre™, CORE™ Athletic Conditioning & Performance Training™ and ZEN•GA™, all of which uphold that same philosophy while adapting to current trends in the industry. We look forward to sharing the most up-to-date training with the Canadian fitness community.”

The three-day symposium is one of the last chances for fitness professionals to earn CECs in 2013 and will offer more than 20 different workshops and foundational courses, allowing attendees to tailor the event to suit their needs. Programs are led by Moira Merrithew and her team of Master Instructor Trainers: John Garey, Kim Kraushar and PJ O'Clair. Registration for Toronto is now open at http://www.merrithew.com/events/25th-anniversary/world-tour. Prices range from $300 for four workshops to $810 to attend all three days with the early registration discount in effect until September 30, 2013.

All large hardware, including V2 Max Plus™ Reformers, Stability Barres™ and other equipment used during the courses and workshops will be available for sale at 25-percent off of the regular purchase. For more information, please contact equipment(at)merrithew(dot)com.

Merrithew Health & Fitness™ was co-founded by Lindsay and Moira Merrithew in 1988. For 25 years they have been dedicated to enriching the lives of others by providing responsible exercise modalities and innovative fitness brands across the globe. Merrithew’s premier Pilates brand, STOTT PILATES®, delivers best-in-class Pilates education and media to everyone from avid exercisers, elite athletes, and pre/post-natal clients, to rehab and fitness professionals, and is used by studios worldwide. Other high-end MH&F fitness brands include ZEN•GA™, Total Barre™ and CORE™ Athletic Conditioning & Performance Training™. Merrithew Health & Fitness has trained almost 38,000 students in over 100 countries. Merrithew’s Media Division (MMD) produces print and video-based content for professional and consumer markets. For more information, visit merrithew.com.