Revolutionary Sciences weighs in: today, the most common injuries associated with autoclave use are burns. The Saniclave autoclaves reduces the risk of burns with a thermally protective outer shell. 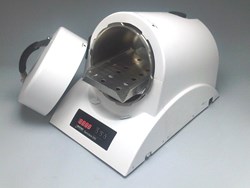 The most common injury caused by autoclaves are burns.

Steam sterilization (autoclaving) is the single most effective form of sterilization. Although the United States Food and Drug Administration and ANSI/AAMI have recently increased their safety requirements, users are still concerned about the safety hazards of using an autoclaves. Burn risk is the most common injury attributed to autoclave use. New autoclaves, like the Revolutionary Science Saniclave 200 contain a thermally protective outer shell that protect the user against burn risk.

The most common injury caused by autoclaves are burns. Autoclaves that were designed 30, 20 or even 10 years ago are still on the market today, rarely updating or improving upon their designs. Many of these older designs are hot to the touch and will cause first, second or even third degree burns if the exterior of the autoclave comes in contact with human skin. South Carolina University states in their policy that autoclaves can cause sever burns to the body or face and that "you should seek medical treatment as soon as possible."

Thermally protective enclosures are becoming an industry standard. The ANSI/AAMI ST55 (a committee that partners with the FDA in these issues) requires that sterilizer manufacturers "ensure that surfaces touched by the operator during normal sterilizer operation cannot exceed a safe temperature." Eric Kaari of Revolutionary Science states "our Saniclave 200 was designed with this in mind. Autoclave burns are painful and common. For this reason our autoclave is enclosed in thermally protective polymer. The outside remains cool to the touch. The user cannot get burned by touching the autoclave."

The American made Saniclave 200 is available for approximately $1,000 USD. The Saniclave 200 is a compact, 10 liter autoclave, fashioned with a digital display. The sterilization cycle is 121C for 30 minutes - the hospital standard - is long enough to kill the AIDS virus and "MRSA, the flesh eating disease." A dry mode allows for drying both wrapped and unwrapped instruments. It is available with or without a printer and in 120 or 240 volts.

Registered with the FDA and ISO, Revolutionary Science is a Minnesota company dedicated to the manufacturing of precision life science and sterilization equipment.