Deadline for the 2013 On Location: The Los Angeles Video Project Approaching

Presented by NewFilmmakers LA Film Festival, the On Location Program serves as a community outreach multimedia program inviting filmmakers to showcase the city of Los Angeles through film. 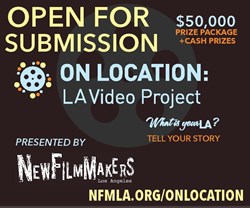 Last call for submissions for the 2013 On Location: The Los Angeles Video Project!

In partnership with the City of LA and LA Weekly, the NewFilmmakers LA Film Festival presents On Location: The Los Angeles Video Project, an annual event inviting filmmakers to serve as ambassadors for the City of Angels and create narrative, documentary, commercial, or animated short films depicting their vision of the unique community that is Los Angeles.

With the September 7th deadline quickly approaching, selected finalists will be screened during the 2013 On Location premiere event October 19th at the AT&T Center in Downtown LA, and featured through NewFilmmakers LA Film Fest & LA Weekly’s social media networks with a combined audience of over 200,000 viewers.

Finalists will also compete for a variety of prizes including cash prizes and production prizes. Two 1st Place & Audience Award winners will be selected, receiving cash prizes and 6-month subscriptions to VideoBlocks.com, along with a Grand Prize winner who’ll be recipient of a production/post package valued at $50,000 from Equilibrium Entertainment and Alternative Rentals, a one year unlimited download subscription to VideoBlocks.com valued at $950, and an additional $1,000 cash prize.

New this year, there will also be an overall Sony 'Genesis Award' winner, receiving a production packaged valued at over $8,000 from Sony Pictures Entertainment. Package includes Sony’s professional level products such as a Full-Frame Interchangeable Lens Camcorder, an XLR Adapter and Microphone Kit, a 18-200mm f/3.5-6.3 Telephoto Lens, and a carrying case. In addition, five film permits from Film LA, valued at $625, and six bundles, including Movie Magic Budgeting 7 and Movie Magic Scheduling 5, from Entertainment Partners, valued at $788, will also be awarded. In total, the filmmaking program offers over $70,000 in prizes.

During its inaugural year, On Location took place at the historic Sunset Gower Studios in Hollywood, home to many hit shows such as Showtime’s “Dexter” starring Michael C. Hall, and ABC’s “Scandal” starring Kerry Washington. Year two marked the debut of On Location at the AT&T Center in Downtown LA with a powerhouse event showcasing spectacular independent films. Director Gregory J.M. Kasunich won the Grand Prize with his 4-minute short, “Los Angeles: Find Yourself”.

Information regarding submission guidelines and categories can be found on the Official 2013 On Location website at http://newfilmmakersla.com/onlocation/. Entries must be received by September 7th, 2013 at 11:59PM.

NewFilmmakers Los Angeles (NFMLA) is a non-profit organization designed to showcase innovative works by emerging filmmakers from around the world, providing the Los Angeles community of entertainment professionals and film goers with a constant surge of monthly screening events. NFMLA provides a forum where filmmakers can be recognized for their contributions, have open audience discussions about their projects and connect with industry professionals for insight on distribution, production, acquisition and representation.