Bargain deals being offered to attend the event in Paris, occurring on the 21st and 22nd of September. 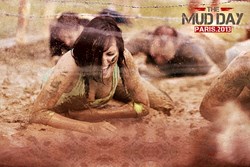 TravelhouseUK has served to make air travel bookings fast paced as well as competitively economical, with budget deals being published in real time on its online portal.

Supporting leisure air travel on all scales, TravelhouseUK has affiliated itself with hotels, air operators as well as events and festivals to keep its client base posted with what they can avail for a vacation. The agency is contributing its role in the Mud Day celebrations in Paris, France by releasing special airline tickets for potential attendants from the UK.

TravelhouseUK has served to make air travel bookings fast paced as well as competitively economical, with budget deals being published in real time on its online portal. Cheap airfares to Paris are being operated under major air carriers from London’s Heathrow Airport, with Air France, British Airways, Swiss Air and Alitalia providing offers of the season.

The Mud Day will be organized at the Military Camp Frileuse, which will be specially opened up for the general public for the occasion on the 21st and 22nd of September. The military camp is located in the outskirts of France, and has an entire mud course for the participants to test their limits of physical endurance and strength in the competition.

The mud course is established with a variety of obstacles for the participating ‘mud guys’ to get up against. Even though individuals can sign up for participation, teams are recommended as cooperation and assistance comes in quite handy at certain stages. Mud guys have to crawl through mud pits under barbed wires for a start, settling in the iconic military environment within the camp. Climbing up nets of ropes, marching through an ice bath as well as a pool of mud, heaving up loads of weight and jumping across high walls of planks combines all abilities of mental and physical strengths, not to miss all the fun in the activity. To add in some thrill, a horror tunnel is also included to make the contestants crawl through pitch dark while believing in their instincts. It’s a great opportunity to socialize with the sporting community of the Mud day, as ceremonies are focused for getting to interact and meet with veterans as well as observers of the sport. Registrations are received in thousands of numbers aiming for the mud day celebrations at the military camp.