Every year SelfLube receives high marks during its annual ISO 9000 audit and this year was no exception. The company is happy to announce its fifth year milestone. 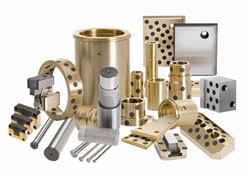 Quality products is one of the key areas SelfLube focuses on for its quality system.

A rigorous annual audit is required to make sure that we have not fallen into wicked ways.

SelfLube, the leading U.S. manufacturer of mold and die components, just completed its 15th annual ISO 9000 audit of its quality system. The company is happy to announce its amazing accomplishment - five straight years with zero non-conformances.

"This is a very big deal," says owner Phil Allor. "15 years ago we were a very small company and like many small companies we didn't have much in the way of quality systems. But, we had big ambitions and we made the decision that if we wanted to get bigger we would need to start acting like the company we wanted to be. That led us to adopt the ISO 9000 quality standard. It seemed kind of silly at the time and a lot of people told us so, but it ended up being one of the best decisions we ever made."

SelfLube has grown tenfold since that time and Allor sees the Company's adherence to ISO 9000 as a big factor in that growth. "We have gone from fly spec to quality leader and now to leader, period in our industry - not so surprising when you think of it," adds Allor.

SelfLube is currently registered to the ISO 9001:2008 quality standard. "A rigorous annual audit is required to make sure that we have not fallen into wicked ways," jokes SelfLube ISO Coordinator Jennifer Anderson. It covers four key areas:

1.) Quality of the product
2.) Understanding the needs and priorities of customers
3.) Meeting expectations for on-time delivery
4.) Satisfactory response by SelfLube personnel

In addition, SelfLube also surveyed its customers asking them to rate the company in the same four areas. Over the next several months the company will use the survey responses as the basis for making further improvements to its quality system.

SelfLube has been in business for 23 years and is the leading U.S. manufacturer of mold and die components. It serves the mold, die and special machine shops throughout the US, Canada and now in Mexico. Its product line consists of over 8,000 standard part numbers. Many of which are self-lubricating and include bushings, wear plates, parting line locks and many others.