One in Seven Alaskans Employed by the Alaska Seafood Industry 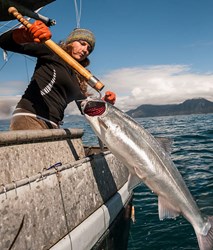 Produced by Alaska-based research firm The McDowell Group, the report is the first of its kind, and finds that in 2011:

One important factor pointed out in the report is that “seafood is Alaska’s most valuable renewable resource and, with responsible stewardship, jobs created by the industry can be passed down from generation to generation.” Thanks to Alaska’s long-standing responsible fisheries management, Alaska has been able to increase the economic value of the resource over time, creating new wealth in Alaska and the region, making “the cumulative value of Alaska’s seafood resource virtually priceless.”

The 104-page report is available for download in PDF format here.

The Alaska Seafood Marketing Institute (ASMI) is a public-private partnership between the State of Alaska and the Alaska seafood industry established to foster economic development of a renewable natural resource. Further information on ASMI is available at http://www.alaskaseafood.org.