The New York State Athletic Trainers’ Association (NYSATA) is proud to officially reveal a new scheme of logos and branding elements. The identifying marks are a fresh take on the original logo with the necessary updates to stay true to the athletic training profession of today. 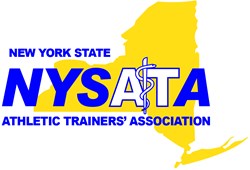 Redesigning the NYSATA logo was essential to appropriately portray the athletic training (AT) profession of today.

The profession of athletic training (AT) as a whole - and in the state of New York - has come a long way in the last three-plus decades. Redesigning the NYSATA logo was essential to appropriately portray where AT is in the 21st century, while not losing a link to its roots. As the state-level affiliate organization of, and for, certified athletic trainers, NYSATA wants to be better identifiable as such.

In tribute to our previous logo, which was the original logo of NYSATA since its founding in 1976, effort was made to preserve certain characteristics. For branding as a state-wide organization the blue and yellow color scheme was maintained, as they are the official NYS colors, and the full silhouette of NY State was again incorporated into most layouts. As another nod to the original logo, two updated variations of a NYSATA circular seal were created.

Though many elements of the previous logo were well-planned, evolution of the athletic training profession – nationally, as well as state-wide – and the need to become a more prominent public presence created the need to revisit the emblem that represents the NYSATA organization and AT profession in NYS. One necessary change was using the appropriate medical Rod, or Staff, of Asclepius (single snake) versus the Caduceus (double snake with wings).

Emphasizing ‘Athletic Trainers’ Association’ through better placement and larger text, as well as the ‘NYSATA’ abbreviation were noted as crucial components for the new logo and were two of the primary reasons for pursuing this process. In addition, it became clear that, in order to be truly current and progressive, the ‘AT’ within ‘NYSATA’ should also be accentuated. This stays true to the new NATA recommendation that ‘AT’ be the preferred and accepted abbreviation for certified athletic trainers and the athletic training profession and further highlights the profession that NYSATA represents. The National Athletic Trainers’ Association (NATA) unveiled a new logo in late June 2013 with this same feature, so NYSATA is also on par with national branding concepts.

To explore various logo options, three independent designers were brought in to generate ideas. Rose Dovi, Graphic Design Freelancer and Marketing and Communication Specialist (Cortland, NY), Frank Amado, Jr., MSEd, ATC, athletic trainer at Pearl River High School (NY) and co-founder of AT Gear Unlimited, and Chad Green, Visual Arts Education teacher and head varsity football coach at Eastridge High School (East Irondequoit, NY) all created multiple sets of original and modified designs. With permission from the designers, the drafts were then shared amongst the group. The next phase took on a more collaborative and experimental approach, with new mock-ups being created using various combinations of the preferred design elements from the first round. This last process lead to what ultimately has become the new series of NYSATA logos.

Through the logo design and selection process, which lasted roughly nine months, the six-person committee decided that a larger branding scheme with a series of related logos would better serve the needs of NYSATA and its membership. A complete style guide of approved logo options and recommended uses will be available soon on the NYSATA website: http://www.gonysata2.org.

NYSATA, founded in 1976 and incorporated in 1989, stands to advance, encourage and improve the profession of athletic training (AT) by developing the common interests of its membership for the purpose of enhancing the quality of healthcare for the physically active in New York State. Comprised of over 1,200 certified and practicing athletic trainers, NYSATA is the state-wide affiliate of the regional Eastern Athletic Trainers’ Association (EATA) and District Two of the National Athletic Trainers’ Association (NATA).

American Academy of Pediatrics Confirms Value of ATs in HSs