Chinavasion has launched an Android device that allows the user to transform their TV into an Android smart TV. 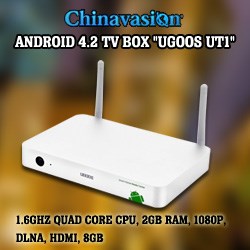 The bottom line is that Smart TVs cost thousands of dollars, while you can simply transform your current HD TV for about 100 USD with this device.

While Android was originally designed primarily for touchscreen devices such as Android phones and tablet PCs, the evolution of it has made it possible for the operating system to be applied to Android TV boxes. “The beauty of such devices is it brings Android straight to your TV, including all the entertainment that comes with it,” says PR manager Rose Li.

As the future is promising, major China tech factories have invested heavily in developing advanced Android TV boxes. An excellent example is the recently launched Ugoos UT1 Android TV Box that comes with an amazing 1.6GHz Quad Core Processor and 2GB of DDR3 RAM, which makes it a true Android powerhouse. “With such specifications you can really multitask at the speed of light and run powerful apps without a problem,” says Li. Based on several tests of Chinavasion, this TV box is currently the fastest and the most reliable device of its type.

China based factories have realized that modern tech consumers not only want to watch YouTube, play Android games, and browse web, they also want to have direct access to the Google Play store where apps, movies, music and more can be downloaded. “The bottom line is that Smart TVs cost thousands of dollars, while you can simply transform your current HD TV for about 100 USD with this device,” says Li. With a full aluminum case, the Ugoos UT1 is designed to target a segment that seeks a TV box that matches their modern TV set.

“Another benefit of the Ugoos is that it comes with two USB ports, allowing users to connect a wireless mouse and keyboard to navigate Android straight from the couch on their HD TV, a feature that makes Smart TV brands nervous,” says Li.

Chinavasion is the leading online electronic store of Android OS based devices, such as Android TV boxes. The E-commerce firm works directly with tech factories in China.