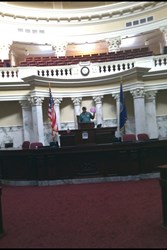 Larry Carries the Gavel at the Idaho State House

If you do what you love, you'll never work a day in your life!

While most Americans are spending their Labor Day Weekend relaxing around a family barbeque or their favorite beach spot, a California Air National Guardsman from Fresno, California is busy dotting the nation in his World Record quest to play disc golf (aka Frisbee Golf) in all 50 states in just 50 days.

Larry Clifford Kirk began his momentous "50 in 50" tour just two weeks ago by knocking off the most remote of these United States, Alaska and Hawaii, over the week of August 12th. His rapid return to the California mainland was the launch point for his mid-western and northwestern jaunt over the last ten days.

"I'm so energized to complete this awesome challenge," beamed the charismatic Kirk. "My passion for disc golf has taken me throughout the US already, and I have made so many great friends and created lasting memories," Kirk said. "Some people ask why am I doing this, and my answer is simple--to raise awareness for the great game I love: disc golf!"

Stationed as a National Guardsman at the 144th Air National Guard in Fresno, California, Kirk is no stranger to blanketing the United States with his disc golf exploits. With two 50 state tours already under his belt, Kirk wanted to raise his game by squeezing his travels to all 50 states in just 50 days.

This weekend, as Kirk transitions into his fourth week, he will zip through Montana and North Dakota today and tomorrow, then plunging through the Gopher State of Minnesota and heading through South Dakota, Iowa, Nebraska, Missouri and Kansas and further points south into Louisiana by September 7th.

"Larry has a singular perspective to promote disc golf, and his 50 in 50 tour is merely the latest in his long line of promotional efforts," explained John Duesler, principal at Disc Golf Planet TV and 50 in 50 publicity manager. "This tour matches Larry's personality perfectly, since his rapid fire approach to life does not allow him to stay in one place too long. We are all trying to keep up with Larry on this World Record attempt," Duesler smiled.

Kirk's 50 in 50 tour is also partnering with Innova Champion Discs to help fund this travels, but there is plenty of opportunity for other sponsors to join in and help Kirk cross the finish line at the United States Disc Golf Championship held on the campus of Winthrop University in October.

Disc golf is a sport that borrows the basic principles of ball golf, but is played instead with specialized flying discs that are thrown into above ground metal-chained targets. Estimates from the Professional Disc Golf Association are that 2-4 million people around the globe participate in this sport. Currently, there are over 3700 disc golf courses listed in 45 nations, with the United States having courses in all 50 states. The PDGA sanctions over 1700 events each year with a total purse of $2.27 million being awarded to the sports top players. Though disc golf has an annual growth rate of 8-12% across all measurable elements, the sport remains predominantly a recreational outlet for most people who play. For Larry Clifford Kirk, however, disc golf has clearly become a way of life.