d’Oliveira & Associates has posted a new informational graphic about cerebral palsy due to medical malpractice. 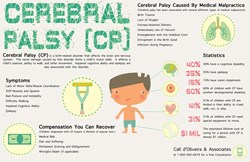 Cerebral palsy is a condition that affects the brain and nervous system. It can occur during fetal development, during birth, or through an injury during infancy. This condition can cause a number of disorders but most frequently it is associated with lack of muscle control and coordination. About 70% of the time this condition is caused by insufficient development in the womb, about 20% suffer this condition due to a brain injury during the birth process, and the remaining 10% suffer this condition due to a brain injury during infancy (i). People who suspect that their child developed cerebral palsy as a result of medical malpractice or another person’s negligence should talk to an attorney about investigating the matter. In some cases, injuries may have been caused by mistakes during birth or an accident during infancy such as a car crash.

According to CDC statistics, cerebral palsy is often linked to a variety of physical problems. For example, 41% of children with this condition are limited in their ability to crawl, walk, run, or play and 31% of these children need special equipment to move. Additionally, 40% of these children have a cognitive disability, 35% have epilepsy, and 15% have impaired vision. The government also estimates that the lifetime cost of care for an individual with cerebral palsy is approximately $1 million (ii).

Attorney Paul d’Oliveira stated, “Cerebral palsy can lead to substantial healthcare and living costs. If this condition was caused by the negligence of another, such as the doctors and nurses overseeing the birth, then the family should not have to pay the costs associated with additional care. We work with lawyers who can look into the cause of this condition and who will advocate on your behalf.”

The cerebral palsy infographic provides general information about the condition and warns that in some cases this condition can be caused by medical malpractice. d’Oliveira & Associates handles personal injury and disability cases in Rhode Island and Massachusetts. The law firm works with medical malpractice lawyers, who handle these types of lawsuits, and there are no legal fees unless a settlement or award is obtained. To contact the firm call 1-800-992-6878 or submit a contact form online.