In Celebration of the 50th Anniversary of the March on Washington, Historian Details How Music Helped United People in 1960s America

For the past twenty years, music historian Tom Ingrassia has lectured on the role music played in bridging the gaps between blacks and whites during a turbulent time in American history. Now, in this 50th anniversary year of the historic March on Washington, Ingrassia's multimedia lectures have even more relevance. 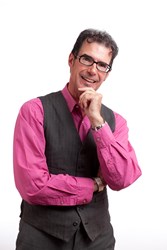 Tom masterfully integrated his personal experiences into his lecture. In a course filled with interesting and colorful topics, Tom's lecture stood out as a major highlight and a major success. - Dr. Jordan Kleiman, State University of New York at Geneseo

During a recent interview on WICN-FM, music historian Tom Ingrassia told "Soul Serenade" show host Tom Shaker about an epiphany he had in 1964. He was eleven years old and living in a small town in upstate New York--far from the glamor and glitter of show business. "That was 1964," he says. "The year The Beatles invaded America. I was a Beatlemaniac, just like everyone else. I had my Beatles lunchbox, trading cards, all their records."

All that changed for Ingrassia on December 27, 1964. "I was watching 'The Ed Sullivan Show,' as we all did on Sunday nights in the '60s. All of a sudden, there were these three glamorous, African American women, right there in my living room. And they were singing just to me," Ingrassia says. It was The Supremes, singing their current Number One record, "Come See About Me"--their first national television appearance.

"I was in love--head over heels in love. And my life changed forever that night. The Beatles were out, and Motown was in! And I remember as if it was yesterday, turning to my mother and saying, 'I'm gonna meet them some day!' Now, remember--I'm eleven years old and living in upstate New York. What did I know about meeting celebrities? But something about that performance captured my soul and inspired me. From that moment on, I could trace my life through the music of The Supremes and Motown," Ingrassia says.

Some day came just eight short years later. Then a student at the State University of New York at Geneseo, Ingrassia had the opportunity to meet Mary Wilson of The Supremes, when he interviewed her for a project he was working on. According to Ingrassia, 'This was my dream come true! Mary Wilson was delightful to interview.'" The two clicked, and soon, Wilson started mentoring the young Ingrassia. "She saw something in me that I didn't see in myself, and she started opening doors for me."

By 2001, Wilson offered Ingrassia a job as creative director of her merchandising business. He worked for her until 2005, when he left to start his own business, managing musicians.

Since he was a child, Ingrassia had been learning as much as he could about the history of popular music--and Motown, in particular. He began amassing a collection of Motown memorabilia. In 1993, while he was working at Regis College, in Weston MA, Ingrassia was asked to present a guest lecture about the importance of Motown for an "African American History" class. That was the start of a twenty year career as a lecturer.

Today, Ingrassia travels the country with his pop culture lecture programs, including "Motown and The Civil Rights Movement". "I have had some incredible opportunities," he says. "I have presented my programs for the National Conference on Race and Ethnicity, the Long Island Museum, Berea College in Kentucky, the Hanover Theatre for the Performing Arts, the State University of New York at Geneseo, and the Albany Institute of Art and History." Other presenting venues have included Cape Cod Community College, Worcester State University, North Shore Community College, the Worcester Institute for Senior Education, the Worcester Art Museum, as well as libraries throughout New England.

"The music of Motown played a critical role during the Civil Rights Era. It was not protest music. But it was the music that brought people together--all people, black and white, young and old, rich and poor--in a way never achieved by any other musical genre. We all listened to Motown. At a time when the British Invasion all but ended the chart presence of other African American musicians, Motown became THE predominant purveyor of American music. The Supremes alone had twelve Number One records!"

"I am living, breathing proof of the impact Motown had on people of all races in the '60s," says Ingrassia. "I mean, I was an eleven year old 'white bread boy.' Yet this music of the African American community captured my imagination. It opened a new world for me. Because of the music I brought into our home, my family became exposed to cultural diversity. And Motown introduced me to the issue of civil rights, and helped me develop a deep commitment to social justice that remains with me today, fifty years later!"

"It is so important to preserve and perpetuate the significance of Motown during a turbulent time in American history. That's why it is so important to me to share my programs with school groups. Motown artists broke down racial, gender and social barriers, paving the way for today's young artists to enjoy their phenomenal success."

"I also get a kick out of doing programs at senior centers and 55+ communities," says Ingrassia. "It is pure joy to watch as I bring back memories for people. People actually remember where they were the first time they heard 'My Guy,' 'My Girl,' 'I Hear A Symphony.' People actually sing and get up and dance during my programs. This is music that resonated with people 50 plus years ago--and it still resonates with people in 2013."

According to Ingrassia, "Motown was and is about so much more than just the music. It was a force to be reckoned with. It was the music that inspired a generation. It certainly inspired me. Everything I do in my life today I trace back to that fateful night in December, 1964, when a little boy dreamed a big dream. And it all started with the music I heard and the images I saw on my television screen. You see, you never know where you will find your inspiration!"

To learn more about how to bring one of Ingrassia's programs to your organization, click this page.