During the IFA 2013, in Berlin, Esorun introduces 2 types of stylish portable chargers. One is E1500 which is a cute mini power bank with 1200mAh power and another is ultra-thin portable charger with 2500mAh whose thickness is only 7mm. 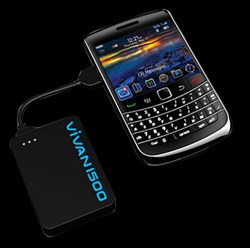 During the IFA 2013, which will be held in Berlin, amongst the many displays, Esorun will be introducing 2 types of stylish portable chargers.

We know that 2 of the products will be the stylish portable chargers. The 1st one (Patent ID: ZL 2012 3 0449931.1) will have a built-in Micro USB connector. Thanks to the USB connector, users will no longer have to be bound by limitations of a cable. The Micro USB connector is concealed to the main body, which looks like a power lock.

The features of the first portable charger includes:

This charger also has four LED indicators to tell the battery status – it is always ready to go. It is available in Blue, Black and White.

The second portable charger is ultra-thin. It is so slim that the user can easily slip it into their pocket or notebook. The features of this charger include:

This power bank is also available in White, Black, Blue and Silver.

For those individuals who are interested in attending IFA 2013 to see the products Esorun will be releasing, their booth number will be 336 at Hall 28.

Esorun is the leading provider of battery cases,iPhone accessories, iPad accessories, keychain charger, wireless external drives, power banks and many other mobile accessories. They have been in business for many years and are located in Shenzhen, China.