The first group of 20 dentists and periodontists have completed training in the Chao Pinhole Surgical Technique™ says John Chao, D.D.S., inventor of the new minimally invasive treatment for gum recession. “Dental professionals from Burbank to Barcelona can now offer what many are calling the best alternative to gum grafting that has been developed.” 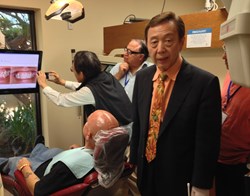 Dr. John Chao with attendees at the first Pinhole Surgical Technique course for dentists and periodontists

Dentist, inventor and educator Dr. John Chao says he knew there must be a better way to treat receding gums without the pain and downtime of traditional gum grafting. So, after years of development, trials and finally gaining patents for both his Pinhole Surgical Technique™ and its specially designed dental instruments, Dr. Chao says he has begun to teach the technique to his colleagues from across the country and around the world.

“The Chao Pinhole Surgical Technique™ (PST) is a sophisticated yet seemingly simple way to move receding gums back into place without grafting surgery,” says Dr. Chao. “Rather than cutting and transferring gum tissue, the new technique takes just a few minutes per tooth treated, with virtually no pain and no downtime,” he says. "The new treatment has been featured on television news stories across the country."

How PST is done:
Dr. Chao says that the affected teeth are cleaned and prepared, and the gum tissue is numbed with a local anesthetic. A small entry point is made in the gum above the tooth or teeth to be treated.

A specialized dental instrument designed and patented by Dr. Chao is inserted into the entry point and moved to free the gum tissue, then the gums are gently guided down to their proper position. Next, the dentist uses a small angled instrument to pass several collagen strips through the entry point and place them under the gums. “The collagen helps to keep the gum tissue in place and stimulates the body to generate more collagen. PST takes about a half an hour to an hour an as many as ten teeth can be treated at the same time. The small entry point quickly heals and is virtually undetectable the next day,” says Dr. Chao.

“Until the invention of the Pinhole Surgical Technique™, gum grafting surgery was the standard treatment for receding gums,” says Dr. Chao. “However, gum grafting requires a scalpel to cut and remove a section of gum from the roof of the mouth which must be sutured in place over the area of recession. Because of the cutting and stitches required most dentists generally will only treat one or two teeth at a time, then the patient will need to heal before having more teeth done,” he says.

“The Pinhole Surgical Technique™ can address several teeth through just one tiny entry point, and unlike gum grafting, multiple teeth can be treated in one session,” says Dr. Chao.

In the first training class, a diverse group of dentists and periodontists were trained in the advanced techniques employed in PST. “All of the attendees have been in active practice for many years and each of them expressed enthusiasm for PST,” says Dr. Chao. “The class also attracted a dentist all the way from Spain, who is bringing PST back to his practice in Barcelona and other European cities.”

For more information on the Chao Pinhole Surgical Technique™ or to locate a dentist who has been trained by Dr. Chao in the new treatment for receding gums, visit http://www.pinholesurgicaltechnique.com or call 888-603-2953.